– Americans’ Equity In Their Homes Near Record Low

– Who Is Making $7.7 Billion In Profits, Pays No Taxes And Gets $4.7 Billion From the US Government On Top Of it?

– Presenting The Fed’s Slogan: ‘Making It Harder To Feed Your Family For 98 Years And Counting’ – At This Rate, The Dollar Will Have Negative Purchasing Power In UNDER 10 Years 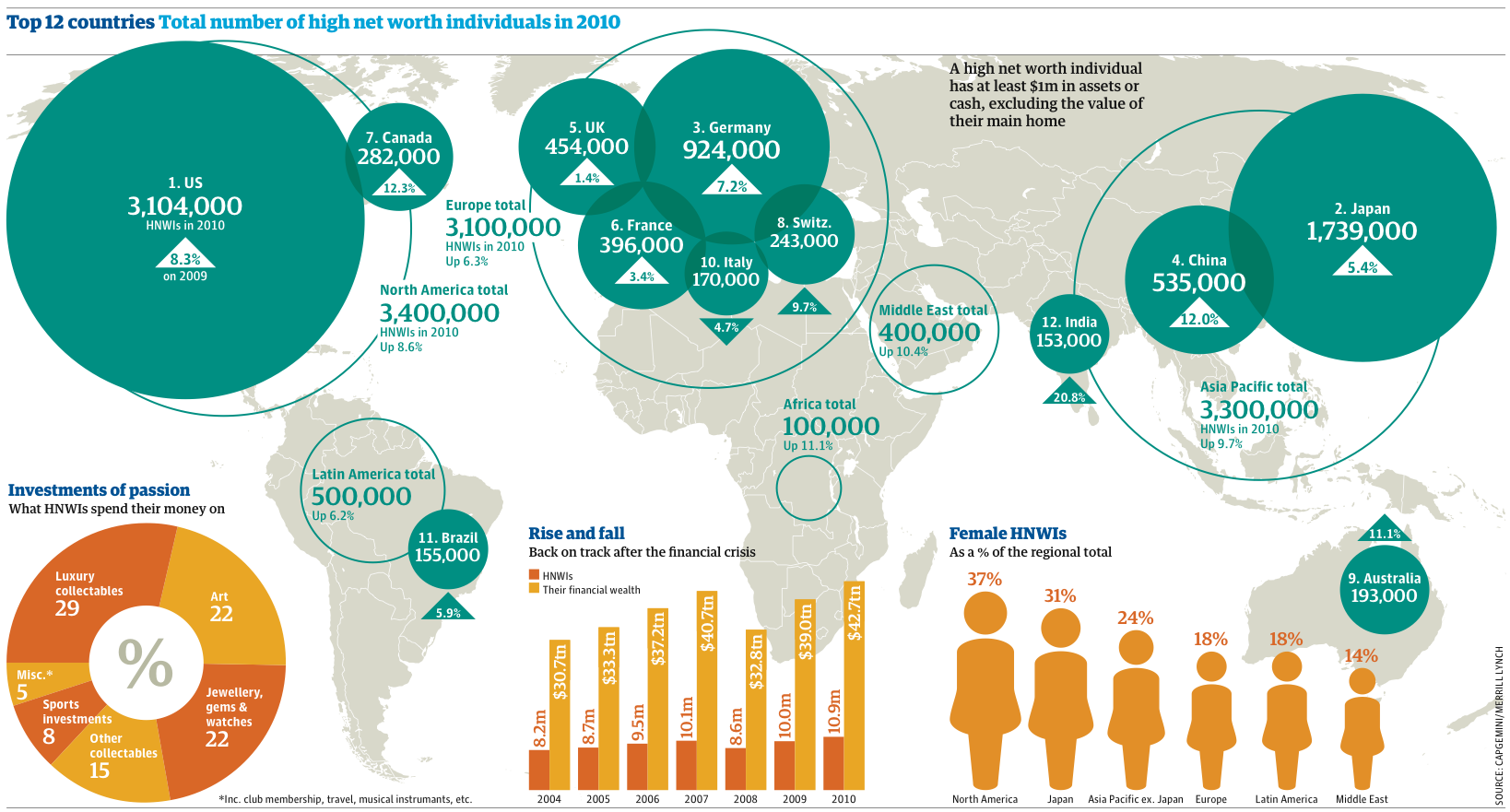 We are not all in this together. The UK economy is flat, the US is weak and the Greek debt crisis, according to some commentators, is threatening another Lehman Brothers-style meltdown. But a new report shows the world’s wealthiest people are getting more prosperous – and more numerous – by the day.

The globe’s richest have now recouped the losses they suffered after the 2008 banking crisis. They are richer than ever, and there are more of them – nearly 11 million – than before the recession struck.

In the world of the well-heeled, the rich are referred to as “high net worth individuals” (HNWIs) and defined as people who have more than $1m (£620,000) of free cash.

According to the annual world wealth report by Merrill Lynch and Capgemini, the wealth of HNWIs around the world reached $42.7tn (£26.5tn) in 2010, rising nearly 10% in a year and surpassing the peak of $40.7tn reached in 2007, even as austerity budgets were implemented by many governments in the developed world.

The report also measures a category of “ultra-high net worth individuals” – those with at least $30m rattling around, looking for a home. The number of individuals in this super-rich bracket climbed 10% to a total of 103,000, and the total value of their investments jumped by 11.5% to $15tn, demonstrating that even among the rich, the richest get richer quicker. Altogether they represent less than 1% of the world’s HNWIs – but they speak for 36% of HNWI’s total wealth.

Age also helps: more than eight out of 10 of the world’s wealthiest people are aged over 45. So does being male: women account for just over a quarter of the total – though this is slightly higher than in 2008. The highest proportion of wealthy women is in North America – 37% of HNWIs – while the lowest is in the Middle East, which has 14%.

Generally, HNWIs are most concentrated in the US, Japan and Germany: 53% of the world’s most wealthy live in one of those three countries, but it is Asian-Pacific countries where the ranks of the rich are swelling fastest. For the first time last year the region surpassed Europe in terms of HNWI individuals.

This scale of wealth of the richest people in Asia Pacific – fuelled by the fast-growing economies in China and India – is now threatening to overtake North America, where the value of the wealth rose more slowly – 9% – to reach $11.6tn.

The richest people in the Asia-Pacific region have also fared better since the crisis. Their wealth is now up 14.1% since 2007 while individuals in North America and Europe are yet to recoup the losses they suffered during the banking crisis.

Britain is lagging behind in the league of affluence – it has not yet enjoyed a return to pre-crisis levels of wealth as sluggish economic growth holds back prospects. The growth in the number of rich individuals in the UK was among the slowest in the top 10 nations, showing a 1.4% rise to 454,000 and remaining below the 495,000 recorded in 2007.

The report said that while the UK stock market rose almost 30% and GDP grew 1.3% – after contracting by 4.9% in 2009 – the fortunes of the rich were held back by falling house prices and the rise in unemployment. Their prospects might improve next year, however. “Construction spending for the 2012 London Olympics is expected to help propel the economy and the housing market recovery,” the report said.

The performance of investments made by wealthy individuals in shares and commodities, and their willingness to take more risks, helps drive their wealth, which in turn fuels “passion” purchases of multimillionaire must-haves, ranging from Ferraris to diamonds, art and fine wines. Demand for such luxuries is especially high among the growing number of wealthy individuals in the emerging markets.

The report warns of problems for this year, saying “the path to global recovery will likely be uneven and various risks remain”.

It added: “The global effects of the financial crisis receded in 2010 but aftershocks still materialised in many forms, including the sovereign debt crisis in Europe and the growing burden of a gaping fiscal deficit in the US. These types of shocks showed the fragility of the economic recovery and could still pose an obstacle to growth in 2011”.

The pace of growth in the wealthy has returned to a “more sustainable pace” since last year’s report, when there was a 17% rise in the number of HNWIs to 10 million, reaching pre-crisis levels.