With the resurgence of Greece back to the top of global news, incompetence and labor strikes charts (just like back in 2010 at roughly this time, which is to be expected since 2011 has been following the 2010 script to the dot) there has been far too little focus in the mainstream media on the family whose actions were responsible for Greece’s rise to glory and subsequent collapse into default. As Associates Press notes in its report the ruling family, “One family has dominated Greek politics for more than half a century: the Papandreous.” For all those who are wondering who the men behind the curtain, or as the case may be, front and center, are, the following expose is for you. 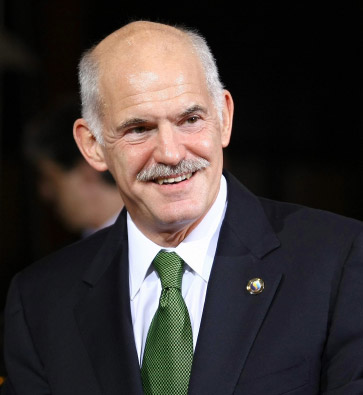 One family has dominated Greek politics for more than half a century: the Papandreous.

The current prime minister’s father, Andreas Papandreou, and his namesake grandfather were larger-than-life leaders credited as reformist architects of modern Greece but also blamed by many for the country’s mountain of debt.

In a historic irony, George Jr. is being forced to dismantle state projects championed by his leftwing father, who poured borrowed billions into job guarantee schemes and expensive development ventures that fostered corruption and helped lay the groundwork for the current crisis.

“The son is paying for his father’s sins,” said author and political commentator Nikos Dimou.

The scion of the Papandreous is the ultimate insider who’s also seen as something of an outsider.

He’s known as “George the American” because he was born in St. Paul, Minnesota, where his father taught at university. He studied at Amherst College and Harvard University, among other prestigious overseas educational institutions. During anti-government rallies, protesters have chanted “George, Go Home!”

Papandreou now faces the near impossible task of sweeping away graft, party patronage and corruption, while fixing wrecked national finances.

He is under immense pressure from just about everyone: European and IMF lenders, hostile opposition parties and the protesting public, even one-time staunch supporters of his Socialist party, including powerful unions and civil servants’ groups.

A failure by Greece to pay back its debts could plunge many other EU countries into financial turmoil and threaten the fragile global economic recovery. At the same time, Papandreou has to manage the anger of a public hit by savage budget cuts and spiraling unemployment.

Many say Papandreou’s approach to Greece’s recovery is valid, but that he lacks the strong leadership skills and charisma of his father and his grandfather.

Andreas Papandreou’s mastery of populist politics and his powers of persuasion were exemplified in rousing speeches to hundreds of thousands of supporters at mass rallies. They helped earn him three terms in office in the 1980s and ’90s as leader of the party he founded — the Panhellenic Socialist Movement party, or PASOK.

He was credited with taking on the country’s entrenched rightwing elite but also blamed for expanding the established patronage system that packed the public sector with loyalists in exchange for votes and allowed Greeks to live beyond their means. The country’s public debt under his rule through the 1980s shot up dramatically.

“George Papandreou must somehow undo what PASOK has done throughout its history,” said Dimou, including taking on powerful trade unions loathe to lose privileges.

It’s a daunting task for George Papandreou who has spent much of his career in politics living up to the expectations of his powerful family and an aging core of Socialist supporters.

George Papandreou Sr. was also a three-time prime minister whose involvement in Greek politics dated back to the 1920s. His friendship and support of Greek liberal statesman Elftherios Venizelos vaulted him to the forefront of the country’s political scene and kept him there for decades.

His liberal politics earned him powerful enemies among Greece’s right-wing establishment. But it was his staunch anti-monarchist stance that prompted the political crisis that saw him ousted from office and eventually led to a 1967-74 military dictatorship.

Even party loyalists question whether the younger Papandreou has the political strength to deal with Greece’s financial woes.

Commentators point to Papandreou’s difficulty in quelling dissent within his party over the deeply unpopular austerity package that has caused the Socialists to slip behind the rival conservatives in opinion polls.

Publisher George Kyrtsos argued that Papandreou mistakenly pandered to unions and other party backers after losing a 2007 general election in order to keep his position as party leader.

“He’s a victim of his own tactics,” Kyrtsos said.

He described Papandreou as an intelligent politician who grasps the “big picture” of unfolding events, but who is let down by his own weak management style and inability to keep track of details.

Analyst George Tzogopoulos said there’s still some doubt as to whether Papandreou can tame the trade unions and rein in party dissenters.

“It’s his last chance,” Tzogopoulos said. “I give him a bit over 50 percent that he’ll succeed.”

What’s more, Papandreou has been ineffective in communicating the gravity of Greece’s predicament, commentator Dimou said.

“This government has lost the game not only on handling the economy, but also on public opinion,” he said. “The government hasn’t managed to sufficiently explain the situation and that these measures are necessary.”

He also lacks his father’s populist touch, Dimou argued — a trait that could be useful when facing a wave of public discontent.

“George Papandreou doesn’t have the same personality, the charisma,” he said. “It’s like telling an actor without any talent to play Hamlet … He doesn’t possess the talent.”