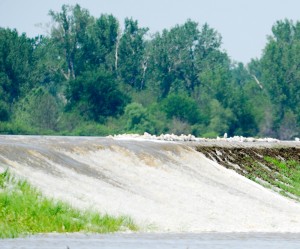 Floodwaters from the Missouri river overtop a levy in Brownville, Neb., Sunday, June, 19, 2011. When the Missouri River reached 42.5 feet, or 899 feet above sea level Sunday morning, the Nebraska Public Power District issued a flooding alert for its nuclear power plant, Cooper Nuclear Station. Cooper, located near Brownville, is at 903 feet elevation, and NPPD officials said the river would have to climb to 902 feet at Brownville before officials would shut down the plant. (AP)

A levee three miles north of Brownville in Missouri failed at about 9 p.m. Thursday, right in front a pair of people patrolling there.

“It happened so quick that they were concerned that they may not be able to escape,” Mark Manchester, deputy emergency management director for Atchison County, Mo., said late Thursday. “The water was coming through fast and hard. … We’re not sure what the size of the break is so far.”

Officials have ordered the evacuation of all of the county west of Interstate 29, he said. That includes the towns of Phelps City, Langdon and Watson, as well as the Nishnabotna Conservation Area.

Manchester said the extent of the breach likely wouldn’t be clear until daybreak.