– After Dumping 30% Of Its Treasury Holdings In Half A Year, Russia Warns It Will Continue Selling US Debt (ZeroHedge, June 18, 2011):

Just in time for the end of QE2, when the US needs every possible foreign buyer of US debt to step up to the plate, we get confirmation that yet another major foreign central bank has decided to not only not add to its US debt holdings, but to actively sell US Treasurys. The WSJ reports that “Russia will likely continue lowering its U.S. debt holdings as Washington struggles to contain a budget deficit and bolster a tepid economic recovery, a top aide to President Dmitry Medvedev said Saturday. “The share of our portfolio in U.S. instruments has gone down and probably will go down further,” said Arkady Dvorkovich, chief economic aide to the president, told Dow Jones in an interview on the sidelines of the St. Petersburg International Economic Forum.” Well, with Russia out, at least we have China and Japan continuing to buy US debt…. Oh wait, China is contemplating dumping two thirds of its debt you say? And the biggest buyer of Japanese bonds is now in the process of selling Japanese bonds in the open market for the first time (so not really in the market of US bonds). Well, surely US households will step up to the plate. After all they all have so much “cash on the sidelines” courtesy of the RecoveryTM ©® that they can’t wait to dump it all into paper yielding less than 3% a year, and has negative real rates of return. Wait, what’s that: according to the Fed, in Q1 US “households” sold $1.1 trillion annualized in Treasurys to the Fed? So, let’s get this straight: China, Japan, and now very much openly Russia, the three countries with the largest financial reserves in the world, are threatening, if not already dumping US bonds, just in time for US households to sell their holdings of US paper to Brian Sack. And this is happening 2 weeks before QE2 ends… Um… Are we and Bill Gross (and certainly not Morgan Stanley) the only ones to see a problem with this?

Asked if U.S. debt was as solid an investment now as it was 10 years ago, Mr. Dvorkovich said: “On an absolute basis, yes. On a relative basis, compared to other investments, of course not.”

“When we take decisions and compare, we’re not thinking in absolute terms,” he said.

Russia’s financial reserves—which stood at $528 billion as of June 10—are the world’s third largest, after China and Japan’s. As of May, according to Russia’s central bank, 47% of reserves were in dollars and 41% in euros, compared with 45.2% in dollars and 43.1% in euros on Jan. 1.

The central bank recently diversified the stash to include the Canadian dollar, which makes up 1% of the total, and plans to put 0.8% into the Australian dollar starting in September.

And next, presenting the monthly status update of the second cold war, which is now held entirely between central bank trading accounts. Russia has now cut 30% of its Treasury holdings in the past 7 months. When the caption above the blue thingy hits zero, the “Evil Empire” wins. 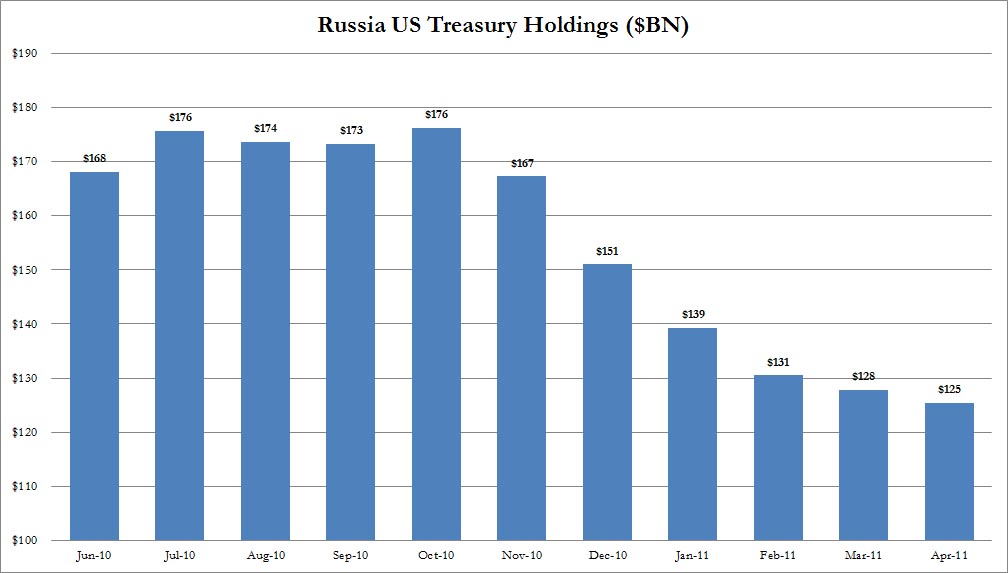