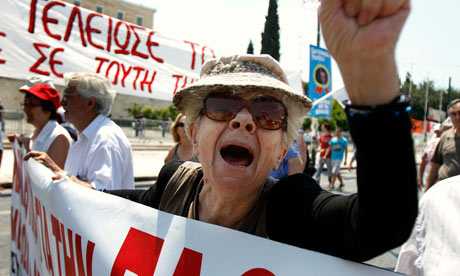 A Greek protester shouts slogans during a rally against the government’s latest austerity measures in central Athens. Photograph: Kostas Tsironis/AP

With its coffers nearly empty, its people protesting and its political system under unprecedented attack, Greece stands on the brink of crisis as European officials prepare for a week of crucial meetings to avert economic collapse.

Fears that a debt-choked Athens could plunge global financial markets into turmoil are mounting as Germany and France edge closer to a new multibillion rescue package for the nation. Eurozone finance ministers are expected to give the green light to an emergency loan for the country when they convene for urgent talks in Luxembourg.

But as George Papandreou, Greece’s beleaguered prime minister, also prepares to hold emergency discussions with European commission president José Manuel Barroso, the assurances have done little to dampen concerns that Athens is heading towards default. The chances are “so high that you almost have to say there is no way out”, said Alan Greenspan, the former US Federal Reserve chairman. His prediction followed reports that 18 months after the eruption of Europe’s worst crisis in decades, the European commission has begun to have a “profound sense of foreboding” about Greece and the future of the eurozone.

The explosive political atmosphere in Athens, a year after it was bailed out to the tune of €110bn by the EU and IMF, has done little to assuage the fears. Last week, as the Greek parliament began debating a new round of austerity measures – demanded in exchange for further aid – and ruling Pasok party MPs began defecting in disgust, Papandreou’s days in power seemed increasingly numbered. A government rejig, which saw the finance minister being replaced by Evangelos Venizelos, a man who until recently was Papandreou’s greatest political rival, was welcomed with scepticism on Friday.

“The gravity of the situation is lost on this administration and Friday’s cabinet reshuffle is ample proof of it,” the former national economy minister Stefanos Manos told the Observer.

“In the posts of finance minister and alternate finance minister,” Manos said, “Papandreou has appointed two populists who are opposed to the memorandum [outlining the reforms agreed by Greece in return for being bailed out] and the very measures they are asked to implement. He’s nuts.”

Twenty months after the socialist leader assumed office – only to discover that, at 15.4% of GDP, Greece’s budget deficit was three times higher than that claimed by the outgoing conservatives – Greeks’ patience with austerity is running out. A year of wage and pension cuts, benefit losses and tax increases has taken its toll: almost a quarter of the population now live below the poverty line, unemployment is at a record 16% and, as the economy contracts for a third year, economists estimate that about 100,000 businesses have closed.

With Athens erupting into violence last week as tens of thousands of protesters marched on parliament, it became clear that the prospect of further belt-tightening is a line few are willing to cross. Banners draped in central Syntagma Square – the hub of relentless demonstrations in front of the parliament building – proclaimed only dictators would pass such measures.

The Spanish-inspired movement of the Aganaktismenoi, or “outraged”, who gather daily in the square – often venting their spleen in loud outbursts – has added to a climate already charged by fear, uncertainty and despair. For the first time since the return of democracy with the collapse of the colonels’ regime in 1974, Greeks say that they are determined to take fate into their own hands beyond party or political creed.

“We are the silent majority who are sick of the corrupt people who have ruled this country for far too long,” said Apostolos Anagnostopoulos, a pensioner, wagging his finger angrily at the parliament building. “What this and every government has to understand is that Greeks aren’t willing to pauper themselves to pay off debt for which they are not to blame. We are in revolt, people may be killed, but whatever it takes we are not going to let those measures pass.”

Like many of those who have joined the protests, Anagnostopoulos says he was spurred into action by the spectre of Greek resources – state-owned assets from prime real estate to public companies – being sold at fire-sale prices to foreigners as part of a €50bn privatisation drive. “Our creditors, the EU and IMF, have basically told Greece ‘sell everything, let foreigners run your ministries, give up your wealth’. It’s outrageous.”

Papandreou has made it equally clear that the top priority of the new government, which faces a vote of confidence on Tuesday, is the implementation of the austerity measures.

The task of persuading Greeks that they are the only way of slashing Athens’s colossal €355bn debt now falls on the shoulders of Venizelos. “But time is running out,” said Manos. “Banks in Greece are living day-to-day because the government is continuing to overspend. Not enough is being done, here or abroad, to stop Greece going bust.”

WHAT’S THE WORST THAT COULD HAPPEN?

Nicolas Sarkozy and Angela Merkel rode to Greece’s rescue on Friday. Does that mean the crisis is over?

Not exactly: the French and German leaders met after finance ministers and officials were unable to reach a deal about how to resolve the crisis. They promised to work towards a new bailout package, which would include a “voluntary” deal with Greece’s private creditors, many of them French and German banks, to roll over some of their loans.

Where does that leave Greece?

The leaders’ warm words temporarily reassured financial markets, but it’s still not clear what the details of any new bailout will be – nor whether it will be enough to make Greece’s debts sustainable.

Even if all its creditors can be persuaded to agree to extend its debts, as the Germans and French hope, the credit ratings agencies might still decide it constituted a default, which could have damaging knock-on effects throughout the global banking system. Merkel and Sarkozy also said they would seek the agreement of the European Central Bank, but its president, Jean-Claude Trichet,is against anything that would qualify as a default.

What can Papandreou do now?

Even if the French and Germans can persuade their partners, the IMF and ECB, to sign up to a new bailout package, the Greek prime minister (pictured) will have to win political agreement for yet more radical austerity measures – and with a wafer-thin majority and riots on the streets it’s not clear he can succeed.

What happens if he can’t get the austerity package through parliament?

Greece would be unable to reach agreement with the IMF and its eurozone partners and be forced to default. That would rock its banking sector, which would probably have to be bailed out, and send ripples through France, Germany, the US and UK, all of whose banks have hefty exposure to Greek debt, either directly, through owning its bonds, or indirectly through complex financial products such as credit default swaps.

Would that be the end of the euro?

Ultimately Papandreou might feel he had no alternative but to pull Greece out of the euro, although there is no formal mechanism for him to do so – and that would put the entire eurozone project under threat.