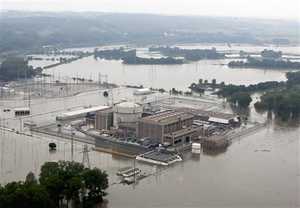 – Floodwaters Might Hit Kansas City By Midweek – Army Corps Running Out Of Options – ‘At This Point, We Have Very Little Flexibility Remaining’

They’re running high out of the mountains, skirting his town, fraying his nerves and converging, more than a mile away.

This is the headwaters of the Missouri River — and the source this summer of so much Nebraska pain.

But this isn’t where the flood begins.

The flood begins higher up, at places like Dark Horse Lake in the Bitterroots, where another 2 inches of snow fell late this week, landing on the 8 feet still on the ground.

And when hot weather finally reaches those upper elevations — starting next month — all of that snow will melt and flow and become, eventually, the floodwaters threatening Sioux City and Omaha and Plattsmouth and so many other river towns downstream.

“It’s all starting here,” said Jim Brusda with the National Weather Service in Great Falls, Mont. “It’s going to flow back down there toward Nebraska.”

It will take its time to get this far downriver. The Dark Horse snowmelt, for example, first must find its way to the Clark Canyon Reservoir, then to the Beaverhead River, then to the Jefferson River.

The bloated Jefferson will join the Madison and Gallatin rivers near Three Forks — and near Gay’s tackle shop.

Where it was raining Friday afternoon. “And it’s snowing in the mountains.”

Seems like it’s feast or famine with the Missouri, he said. Until this year, it’s mostly been famine — with downstream states demanding more Missouri River water from upstream states to keep barges moving.

Those downstream states have more than enough water now. But so does Montana.

“People who have been here 50 years, 70 years, say they haven’t seen anything like this,” Gay said. “All small streams, creeks are full. There are towns that are flooded and cut off. And there’s a lot of water to come.”

The snow-water equivalent in some areas is 400 percent; meaning, snow that usually is 2 feet deep this time of year is 8 feet, something that happens maybe once every 50 years, Brusda said.

And as the snow-fed Missouri crosses Montana, it’s collecting record rainfall, too. Some areas received 10 inches in three weeks; 3 inches fell on a town in northeast Montana between Thursday and Friday.

The rain is expected to continue through the weekend. An even stronger storm system could surface next week.

“And all that water — because the ground is so saturated — is going to flow into the Missouri,” Brusda said. “And that’s the unfortunate part.”