No event (worth mentioning) happens in America (and worldwide) ‘for the lulz’. 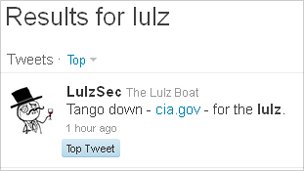 HACKERS FOR YOUR ENTERTAINMENT Lulzsec took down the CIA web site yesterday, ‘for the lulz’.

The group, which hacks or takes down up to three or more online presences a day, announced the hack last night on its twitter feed, saying “Tango down – cia.gov – for the lulz“.

The apparent denial of service attack came on the same day that the hackers opened up a phone request line for targets and continued to rain down its own brand of entertainment on a number of gaming sites, including Eve Online.

This attack seems to have been a brief one and apparently took the US spooks’ web site down for only about an hour. Unlike when it hacked the US Senate, Lulzsec has not released any plundered data and it seemed to move away from its target quickly.

A short while later it added, “Goodnight twitter. The CIA anti-lizards will probably rise from the packet sea while we rest our shining-yet-saturated power field arrays.”

Fun seems to be the motive behind the group’s actions, but that does not mean that it has not created enemies, including some of the infamous 4chan forum members and the even more scary CIA.

That doesn’t seem to bother it though. “Lulz Security, where the entertainment is always at your expense, whether you realize it or not”, reads one of its tweets, “Wrecking your infrastructures since 2011.”

Some here at The INQUIRER strongly suspect that Lulzsec is actually a US government sponsored false flag nuisance hacking operation that’s meant to stampede lawmakers into granting ever more draconian surveillance and control powers over the internet to the emerging US police state.

3 thoughts on “LulzSec Takes Down CIA Website For The Lulz”