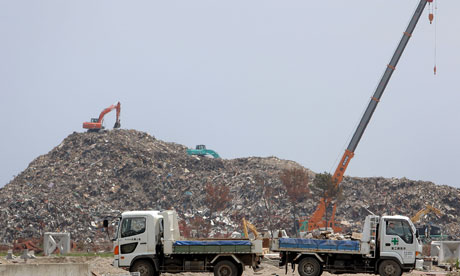 Japan’s government has approved a plan to help the owners of the stricken Fukushima Daiichi nuclear plant provide trillions of yen in compensation, but political maneuvering could delay payments to tens of thousands of victims of the country’s nuclear crisis.

The cabinet’s approval of the scheme on Tuesday came after the plant’s operator, Tokyo Electric Power [Tepco], said a further six workers had exceeded the annual legal dose of radiation, underlining the risks they face as they struggle to stabilise overheating nuclear reactors by early next year.

Shares in Tepco rose dramatically after the compensation scheme was approved, but anger is mounting at the slow progress made in paying families and businesses more than three months after the worst nuclear accident since Chernobyl.

Under the bill, the government would set up a fund and issue special bonds to enable Tepco to pay compensation that the Mainichi newspaper said could reach US$124bn (£75bn). Other power utilities would be asked to contribute to the fund, and Tepco is expected to repay the full sum over an, as yet, unspecified number of years.

In return for state help, Tepco will have to cut costs and turn its management over to the government “for a certain period of time”.

Tepco, whose share price has fallen 90% since the 11 March tsunami crippled the Fukushima Daiichi plant, promised to make repayments as quickly as possible. “We hope that the proposed bill will be enacted in parliament as soon as possible,” it said in a statement.

The measure’s fate is far from certain, however. Some government and opposition MPs oppose the use of public funds to help Tepco, and the prime minister, Naoto Kan, is still under pressure to resign immediately despite surviving a recent no-confidence motion by promising to step down once the crisis is under control.

The current parliamentary session is due to end on 22 June, but the Kan administration is pushing to extend it in the hope of passing the compensation package, as well as an emergency budget to fund post-tsunami reconstruction.

News that the bill had gained cabinet approval lifted investor confidence in Tepco, but concern persists that the company will look to consumers to help fund damages claims in the form of higher electricity bills.

The trade and industry minister, Banri Kaieda, denied media reports that the government had already approved a 16% increase in electricity charges from next April. “The government will make sure that any costs passed on to consumers will be kept to a minimum,” he said.

Tepco and two other power utilities are coming under pressure to end their involvement in nuclear power, with groups of investors expected to raise the issue at shareholders meetings at the end of the month.

The risks facing the thousands of workers who have taken part in the operation to stabilise Fukushima Daiichi were underlined when Tepco said six more were feared to have exceeded the legal limit of 250 millisieverts [mSv] a year, bringing the total to eight.

The limit was raised from 100mSv a year early in the crisis to allow workers to spend more time at the plant, where nuclear fuel in three reactors suffered meltdowns.

In the worst cases, two control room workers were exposed to well over twice the legal limit, Tepco said, as it released preliminary results of radiation tests on almost 2,400 workers who were based at the plant in March, when radiation levels were at their highest.

The health ministry also said on Monday that at least 90 others have exceeded the original limit of 100mSv, including several who are nearing the 250mSv level.

Experts believe that exposure to more than 250mSv increases the chances of a person developing cancer in their lifetime by 1%.

Hidehiko Nishiyama, a spokesman for Japan’s nuclear and safety agency, described the findings as “extremely regrettable”.

Tepco said none of those affected have showed signs of ill health, but added that they would need long-term monitoring.