– James Turk on the US Dollar, the Euro, Hyperinflation, Gold And Silver

Either we have just gotten yet another confirmation of just how worthless the Flow of Funds “household” plug category is, or there is something very, very wrong with conventional wisdom. According to a detailed breakdown of the Z.1 from Goldman Sachs the biggest seller of US Treasurys to the Fed in Q1, at an annualized rate of $1.1 trillion, were… US Households. We have to wonder how this news makes even remote sense when confronted with the ongoing dumping of stocks by retail investors. On the other hand, if indeed the Fed is correct then the entire paradigm of retail jumping into the safety of US paper may have to be reevaluated. And not only that, but if this activity has continued into Q2, it may present even greater risks for the Fed’s unwind of QE2: should households persist in their Treasury dispositions with only dealers left to pick up the pieces, Gross’ thesis may be proven right much faster than we expected, Fed Treasury puts notwithstanding.

To evaluate how different sectors reacted to QE2, we compare average quarterly flows into Treasuries from each sector in Q4 2010 and Q1 2011 against the average flows from those sectors over the prior year. To compensate for lower Treasury issuance in the latter period, we adjust the flows for average issuance in the period. The change in relative Treasury demand can be used to approximate the difference between the amount of Treasuries that each sector would have bought or sold over the last two quarters absent the Fed’s purchases, and what they did buy or sell on average in Q4 2010 and Q1 2011.

As shown in the exhibit below, over the last two quarters, the most significant sources of net supply for Treasury securities were households (note that this includes hedge funds), the foreign sector, and banks. The only significant source of new net demand was money market mutual funds, which went from a net seller in the previous period to a net buyer on average over the last two quarters.

While we consider the trends over the two quarters in which the latest round of asset purchases has been underway, it is worth noting differences between Q42010 and Q12011. In Q4, households were significant buyers of Treasury securities, shifting over $300 billion (bn) annualized into Treasuries, while in Q1 households were the dominant seller, accounting for more than $1.1 trillion (trn) in annualized outflows. By contrast, the foreign sector slowed its pace of purchases in Q1 2011 from Q4 2010, but by only around $130bn annualized; the foreign sector still remains a net buyer. The major decline in demand from that sector came in Q4, when flows into Treasuries slowed from over $1trn in Q3 to about $300bn annualized. 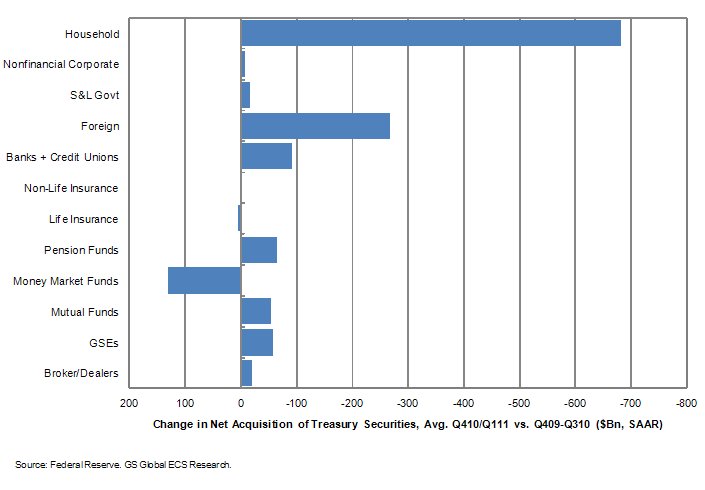 So where did sellers of Treasuries invest their funds instead? The sectors that reduced purchases of Treasuries noted above shifted funds into agency-backed securities (this includes agency MBS and debt), corporate bonds, money market funds, and mutual funds. Notably, there was little change in either consumer credit assets or mortgage loans, and sectors responsible for the greatest relative outflows from Treasuries during the period as a whole also reduced investment in equities relative to the average flows over the previous year (i.e., Q4 2009 to Q3 2010). 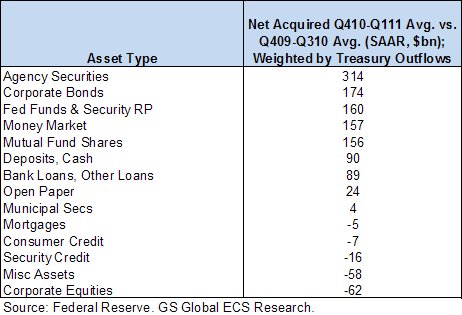 If indeed households were buying up MBS, following the recent battering in the agency market described in our last night’s observations on recently failed Fed Maiden Lane 2 auctions (though keep in mind that one man’s poison is another man’s souffle: for Ben Marsh of BTIG for example a sub<50% auction success rate is the new #Winning), then ordinary US investors have just lost another boatload of money.

Then again, since the “Household” sector is anything but, and is merely a Flow of Funds plug, we would be delighted to get a realistic explanation of just who the Fed ended up paying hundreds of billions in Q1.