“Tobu” or Eastern, Sludge Plant in Koto-ku in Tokyo has an even higher level of radioactive cesium, and the plant may have been spewing radioactive cesium from the incinerator where the radioactive sewage sludge is burned, and has been contaminating the air and the soil in the areas around the plant and downwind (upstream) areas along the Arakawa River.

So it’s a secondary radiation contamination.

And we wouldn’t have known if it were not for the very concerned parents in Koto-ku who decided to organize themselves and ask a researcher from Kobe University to help them measure the radiation.

“Koto Association to Protect Children (江東こども守る会)” held a press conference in the Tokyo Metropolitan Government Building on June 7, and announced the result of its own survey showing the high level of radioactive cesium detected from the athletic ground near the sewage sludge processing plant “Tobu (eastern) Sluge Plant”.

The survey was done by the Association and Professor Tomoya Yamauchi of Kobe University (radiation measurement). Cesium detected was 230,000 becquerels per square meter, 6 times as high as the limit set for the radiation control zone to restrict one from taking an item out of the control zone. Also, in the area around the plant and along the Arakawa river and the old Nakagawa river, there were many locations that registered high air radiation levels exceeding 0.2 microsievert/hour. [The “official” number measured in Shinjuku-ku is about 0.06 microsievert/hour.] Professor Yamauchi says, “Considering the locations with high air radiation levels and the wind direction, it is highly likely that the radioactive materials in the sewage collected at the plant are being released into the atmosphere through the treatment process.” The Association submitted the petition to the Tokyo Metropolitan government demanding the halt of sludge processing at the plant and thorough investigation.

If they are demanding the halt, that means it is still in operation. The plant is located near the river mouth of the Arakawa River in eastern Tokyo as it flows into the Tokyo Bay. Prevailing wind is from the south, going upstream from the plant.

Tokyo Disney Land is about 5 kilometers southeast of the plant, by the way.

The Association uploaded the test result of the samples from 2 locations – athletic ground right next to the sludge plant, and a park 5 kilometers north of the plant; the test was done by a French laboratory (Association pour le Contrôle de la Radioactivité dans l’Ouest). It shows the soil in the park upstream (and downwind) from the plant having higher concentration of radioactive tellurium, iodine, and cesium than the soil taken from the athletic ground right next to the plant. 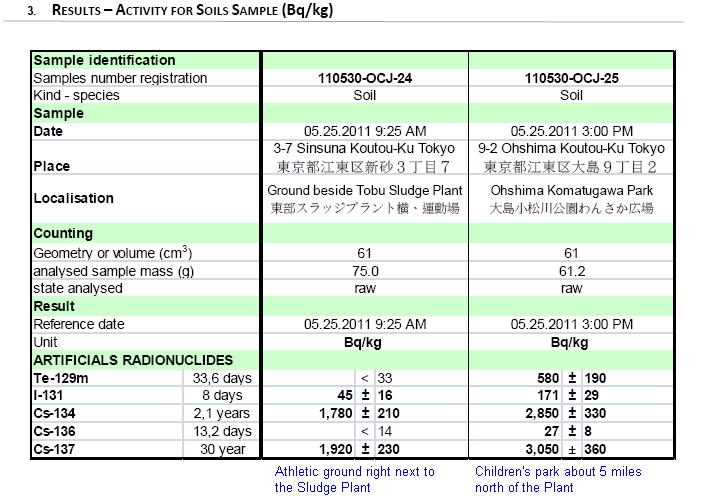