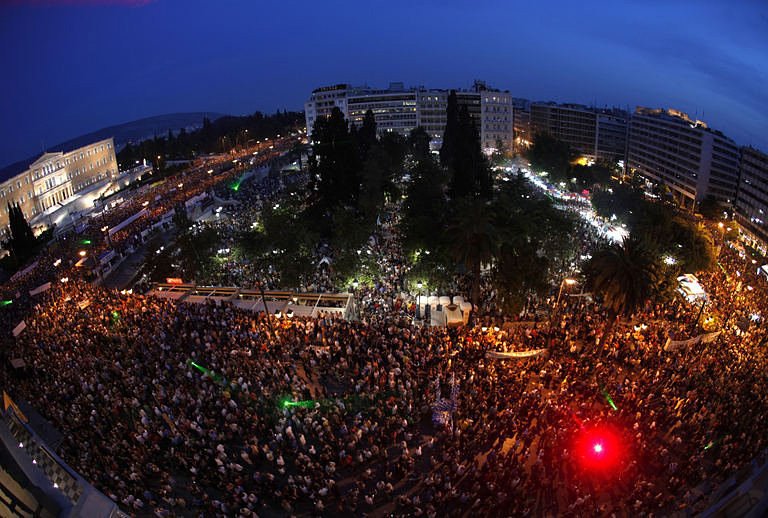 Thousands of Greeks protested outside parliament on Sunday against a fresh austerity package agreed in return for the country’s second bail-out in 13 months by the European Union and International Monetary Fund.

“Thieves, thieves … Where did our money go?” the protesters shouted, blowing whistles and waving Greek flags as riot police thickened ranks around the parliament building on Syntagma square in the centre of the capital.

Activists from the “Indignant Citizens” movement – modelled on its Spanish namesake – have camped in tents around the square for more than a week. Organisers said Sunday night’s events were part of a co-ordinated Europe-wide protest against unemployment and austerity.

Frustration over the Socialist government’s halfhearted reform effort has united diverse activists –from unemployed graduates to environmentalists and pensioners – under the umbrella of the new movement.

George Papaconstantinou, finance minister, is due to unveil on Monday a €6.4bn emergency package of tax increases and cuts in allowances aimed at putting this year’s budget back on track.

He will also announce details of a medium-term fiscal and structural reform programme that includes mergers or closures of several hundred outdated state organisations, cuts in allowances for public sector workers and a €50bn privatisation programme intended to part-finance the new EU-IMF bail-out package.

“The government promised there wouldn’t be any more tough measures but they’re about to announce new taxes and thousands of job cuts,” said Stefanos, a retired civil servant sitting outside a tent.

Banners draped nearby read “Take back the new measures” and “Greece is not for sale” – a reference to the government’s plans to include state property and real estate for tourist development in the privatisation scheme.

Parliament has been the focus of regular marches by trade unionists that have periodically erupted in violence triggered by extreme leftwingers, but the prolonged protest in Syntagma square has raised the stakes for the government as it tries to secure political backing for the latest measures.

High-profile deputies have been increasingly targeted by demonstrators, with opinion polls showing that many Greeks hold politicians responsible for the country’s economic plight.

The Socialists last week accused supporters of Syriza, a small leftwing party, of running a campaign of harassment after protesters threw stones and yoghurt at members of the government attending official events.