Probably the most imprtant secular trend in recent employment data, one that has a far greater impact on the macroeconomic themes than Birth/Death and seasonal adjustment manipulated month to month shifts in the employment pool per either the household or establishment surveys, is the labor share of national income. In a 2004 paper from the St. Louis Fed, the authors make the following statement: “The allocation of national income between workers and the owners of capital is considered one of the more remarkably stable relationships in the  U.S. economy. As a general rule of thumb, economists often cite labor’s share of income to be about two-thirds of national income—although the exact figure is sensitive to the specific data used to calculate the ratio. Over time, this ratio has shown no clear tendency to rise or fall.” It would be wonderful if this was true, and thus if the US population really had a stable distribution of income between laborers and capital owners. Alas it is dead wrong. In fact, as the latest note from David Rosenberg points out, the “labor share of national income has fallen to its lower level in modern history – down to 57.5% in the first quarter from 57.6% in the fourth quarter of last year, 57.8% a year ago, and 59.8% when the recovery began.” And here is where the Marxist-Leninist party of the US should pay particular attention: “some recovery it has been – a recovery in which labor’s share of the spoils has declined to unprecedented levels.”

Like Rosie, Zero Hedge is not a marxist blog: quite the opposite, but like him we come to the same troubling conclusion: “extremes like this, unfortunately, never seem to lead us to a very stable place.” We would go further: not only does the US already have the core elements, should one be so inclined, to provoke a (rather active) anti-fascist movement based on some interpretations of pro-corporatists policies adopted by the administration, but should another be so inclined, the country also has the groundwork in place for another neo-Marxist revolution: just take this chart, add some slogans, mix, and simmer. And who will be the natural enemy? Why only look at the great October revolution in Russia for ideas. History always rhymes. 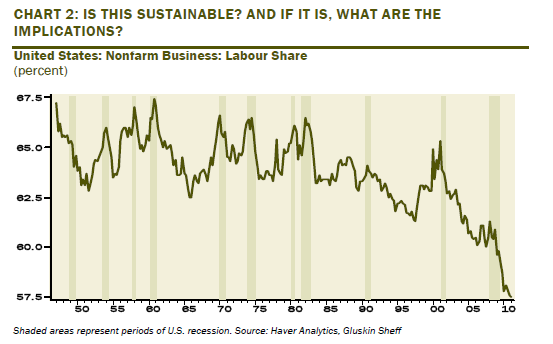 1 thought on “US: Labor’s Share Of National Income Drops To Lowest In History!”