Meir Dagan attacks Binyamin Netanyahu for aggression towards Iran, and for failing to make any progress with the Palestinians 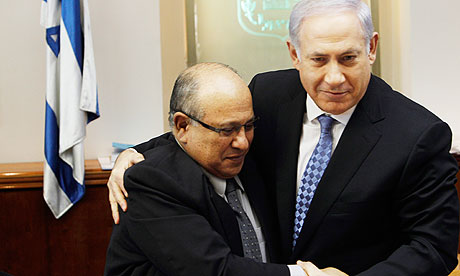 Israel’s PM Binyamin Netanyahu with Meir Dagan as the spymaster left his post as head of Mossad in January this year. Photograph: Ronen Zvulun/AP

The former head of Israel’s spy service has launched an unprecedented attack on the country’s current government, describing it as “irresponsible and reckless”, and has praised Arab attempts to reach an Israeli-Palestinian peace agreement.

Meir Dagan stepped down as the head of Mossad six months ago but has gone on the offensive in a series of briefings with journalists and public appearances because he feels that Israel’s security is being mismanaged by Binyamin Netanyahu, the prime minister, and Ehud Barak, the defence minister.

One newspaper quotes him as saying that he, as head of Mossad, Yuval Diskin, the head of Sin Bet – the internal security agency, and Gabi Ashkenazi, the head of the army, could prevent Netanyahu and Barak from making mistakes but all three have left their positions and have been replaced by men chosen by the current government.

“I decided to speak because when I was in office, Diskin, Ashkenazi and I could block any dangerous adventure. Now I am afraid that there is no one to stop Bibi [Netanyahu] and Barak,” said Dagan.

Upon leaving his post, Dagan publicly warned against Israel attacking Iran to stop it from acquiring nuclear weapons.

In his latest comments, he said that if Israel attacks Iran, it will find itself at the centre of a regional war that would endanger the state’s existence. Dagan’s intervention is dangerous for Netanyahu because it comes from the right wing of Israeli opinion rather than the left, where the prime minister would expect criticism.

Dagan has been in charge of aggressive Israeli actions abroad in recent years, that have included assassinations in Lebanon, Syria and Dubai and an air attack on a suspected nuclear reactor in Syria. He also criticised Israel’s failure to offer any initiative to resolve the conflict with the Palestinians .

The absence of any workable plan, he said, will leave Israel in a dangerous and weak situation if the Palestinians push for UN recognition of a state later this year.

Dagan also endorsed Saudi Arabia’s peace plan which offered Israel normal relations with all Arab countries if it reaches a peace agreement with the Palestinians. Leading columnist Ari Shavit summarised Dagan’s point of view in the Ha’aretz newspaper: “Dagan is extremely concerned about September 2011. He is not afraid that tens of thousands of demonstrators may overrun the settlements. He is afraid that Israel’s subsequent isolation will push its leaders to the wall and cause them to take reckless action against Iran.”

Ben Caspit of the Maariv newspaper wrote: “He is one of the most rightwing militant people ever born here … who ate Arabs for breakfast, lunch and dinner.

“When this man says that the leadership has no vision and is irresponsible, we should stop sleeping soundly at night.”

Dagan was quoted in the newspaper Yedioth Ahronoth describing Netanyahu and Barak as “irresponsible and reckless individuals”.

Dagan’s criticism of Netanyahu comes when the prime minister is enjoying popular support following his trip to Washington and his speech to Congress.

Opinion polls suggest that Netanyahu has a nine-point lead over his nearest challenger and his Likud party is the most popular in the country.

However, Dagan’s intervention suggests that while Netanyahu is seen as an able performer in public, he believes that behind the scenes he is less astute.

A spokesman for the prime minister said that he would not discuss Dagan’s comments. However members of the cabinet told the Israeli media: “Dagan was out of line on the Iranian issue. This damages deterrence, because the military option must be on the table as a credible option after sanctions.

“If you come and say, ‘we can’t attack Iran, it’s impossible,’ you project weakness to the Iranians and make it look like you don’t have the courage to do it, and that they can do whatever they want.

“More seriously, it sends a message to the world that they can take their foot off the gas pedal of sanctions.”

1 thought on “Former Head of Mossad Meir Dagan: Israel Government ‘Reckless And Irresponsible’ – ‘I Decided To Speak Because When I Was In Office, Diskin, Ashkenazi And I Could Block Any Dangerous Adventure. NOW I AM AFRAID THAT THERE IS NO ONE TO STOP BIBI AND BARAK’”