– Belarus Devalues Its Currency By 56% Overnight, Against Every Currency Out There

Belarus has applied to the International Monetary Fund (IMF) for an emergency loan of up to $8bn (£5bn), which could help to rescue the ex-Soviet republic from its fiscal crisis. 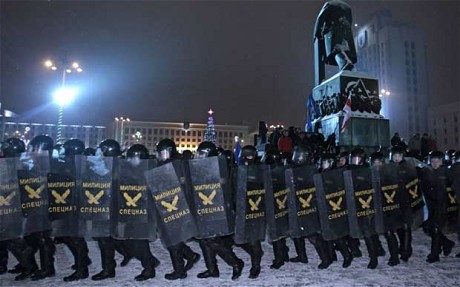 Belarus has been hit by massive state spending ahead of presidential elections last year Photo: AP

The move comes just a day after the country’s government announced it was raising its main interest rate from 14pc to 16pc, and that it was freezing prices on a number of staple foods until July 1.

Belarus has been hit by a dire cash shortage that was sparked by a jump in the price Russia charges for energy as well as massive state spending ahead of presidential elections last year.

President Alexander Lukashenko’s isolated government was forced to devalue the currency by more than a third of its value last month and has been unable to receive direct assistance from traditional sponsor Russia.