Greece’s Government Prepares to Sell Up to $42.9 Billion of Public Property to Reduce Its Mountain of Debt 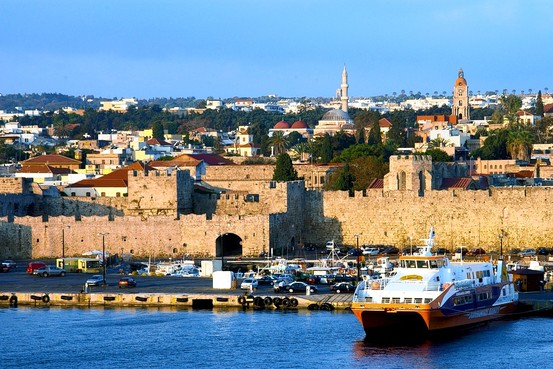 Sales of public land by Greece may include a concession to develop a luxury resort on the island of Rhodes, whose harbor and historic city center in 2007 are shown. The first properties could be put on the market in the next few months.

Now might be your chance to buy that portion of a Greek island you have been coveting.

As part of Greece’s privatization plan to raise cash to reduce its mountain of debt, the national government is preparing to sell as much as €30 billion ($42.9 billion) of public property. It is still early in the process, but future sales are likely to include assets ranging from the government’s stake in the Mont Parnes Casino resort in Athens, hotels, and even a concession to develop a luxury resort with a world-class golf course on the island of Rhodes.

The Hellenic Public Real Estate Corp., the government body that manages public property, has a list of about 75,000 individual government-owned properties. The corporation has appointed National Bank of Greece SA to lead a consortium of advisers who are now preparing to sell an initial portfolio of 20 to 30 properties, the first of which could be put on the market in the next few months, according to Aristotelis Karytinos, general manager of the real-estate division at National Bank of Greece.

The International Monetary Fund, in its latest report on Greece, estimates that as many as €15 billion could be raised through real-estate sales. Mr. Karytinos says expected proceeds from property sales or leasing is now estimated at between €15 billion and €30 billion. The first step is to sift through the long list of public property, identify the best real estate, and resolve any legal issues to ensure that the property is able to be fully developed by investors.

“We more or less know what the government owns, but many of the properties may have some legal or technical problems that need to be resolved before we can exploit them,” Mr. Karytinos said in an interview. “In some cases, we may have to rezone properties.”

The real-estate privatization is part of a broader program to sell government holdings valued at about €50 billion, which Athens agreed to do to obtain a €110 billion bailout by the European Union and the International Monetary Fund. The IMF has been pressing Greece to accelerate the privatization process and is particularly keen to see Athens dispose of stakes in properties and industries that it believes are better left to the private sector, such as running gambling casinos.

Greece hopes to attract international investors to create modern resorts and residential communities for foreign tourists. “The tourism industry is clearly one of our major strengths,” Mr. Karytinos said. “This is an area where we have an advantage, and we are talking to international investors about creating these types of developments.”

Most of the public real estate is undeveloped land or retired sites such as the old Athens airport at Hellenikon. In most cases, the Greek government may not actually sell the property outright but is more likely to lease the underlying land for development.

“Our strategy is to award concessions, long-term leases of 30 to 40 years, depending on the individual property, but the government will retain ownership of the land,” Mr. Karytinos said. “The first properties should come to market in the next few months, but certainly by the end of the year.”

Long-term leases are attractive partly for political reasons. Development by foreign investors would be more palatable for Greek citizens if the underlying land remains in government hands.

But investors also may welcome such an arrangement. Much of the property owned by the government consists of large land plots close to the sea, which may be prohibitively expensive in an outright sale. It will also be easier for the government to lease land than to sell it outright because the Greek public is largely opposed to any privatizations. “A concession with a long lease is better for all concerned,” says Dika Agapitidou, director of Athens Economics Ltd., a property consultant and affiliate of Jones Lang LaSalle.

Another part of the real-estate privatization could involve raising cash through sale-and-leaseback deals with public buildings, although this would be a small part of the total property privatization, Mr. Karytinos said. In a sale and leaseback, the government would sell public buildings to an investor and enter into a long-term agreement to rent the space in the building. This way, the government receives cash upfront and the investor has long-term secure income.

Mr. Karytinos acknowledged, however, that the government may have to reform its tenant laws before pursuing sale-and-leaseback deals. Investors are wary of entering into such deals in Greece because of strong tenant rights.

“It is too easy for tenants to break leases in Greece, and that adds too much risk to the transaction,” says Alistair Calvert, a London-based partner with Northcliffe Asset Management Ltd., an investment firm specializing in sale-and-leaseback transactions.

Whatever the next step is in Greece’s plan to privatize public real estate, all eyes will be on how Athens handles the first deals that come to market.

“It is extremely important that they get the first couple of projects right,” Ms. Agapitidou said. “If the first projects go well, the interest of international investors will increase.”