– An Inversely-Correlated Take On Corporate Profits And Dollar Destruction (ZeroHedge, May 31, 2011):

One of the more interesting correlations (not causations) to have emerged following the surge in corporate profit margins is that of the inverse relationship between now record corporate profit margins, and net exports & services originating from the US. While we certainly will not imply one is a cause of the other or vice versa, we would be remiss to not point out the irony of what would happen should this correlation preserve itself in an environment in which US exports end up being curbed due to a surge in the US dollar once the frailty of the Eurozone no longer allows the EUR to appreciate on desperate one-time (if recurring) rescue measures. And with China largely ignoring US demands to revalue its currency and import more US goods and services (no laughing), is it safe to say that this chart is the one most direct confirmation that the weak dollar policy adopted by the Fed has had it most proximal impact nowhere else than on surging corporate profit levels (and Wall Street bonuses of course). 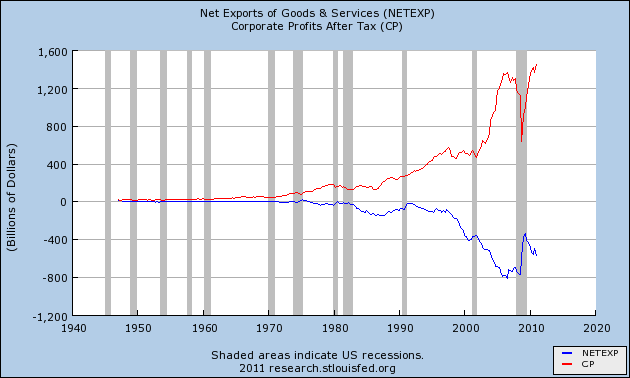