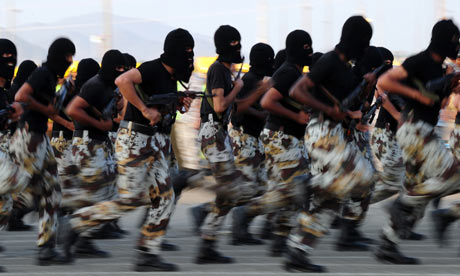 Britain is training Saudi Arabia’s national guard – the elite security force deployed during the recent protests in Bahrain – in public order enforcement measures and the use of sniper rifles. The revelation has outraged human rights groups, which point out that the Foreign Office recognises that the kingdom’s human rights record is “a major concern”.

In response to questions made under the Freedom of Information Act, the Ministry of Defence has confirmed that British personnel regularly run courses for the national guard in “weapons, fieldcraft and general military skills training, as well as incident handling, bomb disposal, search, public order and sniper training”. The courses are organised through the British Military Mission to the Saudi Arabian National Guard, an obscure unit that consists of 11 British army personnel under the command of a brigadier.

The MoD response, obtained yesterday by the Observer, reveals that Britain sends up to 20 training teams to the kingdom a year. Saudi Arabia pays for “all BMM personnel, as well as support costs such as accommodation and transport”.

Bahrain’s royal family used 1,200 Saudi troops to help put down demonstrations in March. At the time the British government said it was “deeply concerned” about reports of human rights abuses being perpetrated by the troops.

“Britain’s important role in training the Saudi Arabian national guard in internal security over many years has enabled them to develop tactics to help suppress the popular uprising in Bahrain,” said Nicholas Gilby of the Campaign Against Arms Trade.

Analysts believe the Saudi royal family is desperate to shore up its position in the region by preserving existing regimes in the Gulf that will help check the increasing power of Iran.

Defence minister Nick Harvey confirmed to parliament last week that the UK’s armed forces provided training to the Saudi national guard. “It is possible that some members of the Saudi Arabian national guard which were deployed in Bahrain may have undertaken some training provided by the British military mission,” he said.

The confirmation that this training is focused on maintaining public order in the kingdom is potentially embarrassing for the government. Coming at the end of a week in which the G8 summit in France approved funding for countries embracing democracy in the wake of the Arab spring, it has led to accusations that the government’s foreign policy is at conflict with itself.

Jonathan Edwards, a Plaid Cymru MP who has tabled parliamentary questions to the MoD about its links to Saudi Arabia, said he found it difficult to understand why Britain was training troops for “repressive undemocratic regimes”. “This is the shocking face of our democracy to many people in the world, as we prop up regimes of this sort,” Edwards said. “It is intensely hypocritical of our leadership in the UK – Labour or Conservative – to talk of supporting freedoms in the Middle East and elsewhere while at the same time training crack troops of dictatorships.”

The MoD’s response was made in 2006, but when questioned this week it confirmed Britain has been providing training for the Saudi national guard to improve their “internal security and counter-terrorism” capabilities since 1964 and continues to do so. Members of the guard, which was established by the kingdom’s royal family because it feared its regular army would not support it in the event of a popular uprising, are also provided places on flagship UK military courses at Sandhurst and Dartmouth. In Saudi Arabia, Britain continues to train the guard in “urban sharpshooter” programmes, the MoD confirmed.

Sprague said a shake-up of the system licensing the supply of military expertise and weapons to foreign governments was overdue. “We need a far more rigorous case-by-case examination of the human rights records of those who want to buy our equipment or receive training.”

An MoD spokesman described the Gulf states, including Saudi Arabia, as “key partners” in the fight against terrorism. “By providing training for countries to the same high standards used by UK armed forces we help to save lives and raise awareness of human rights,” said the spokesman.

“On the one hand Saudi Arabia faces the threat of al-Qaida but on the other its human rights record is dreadful. This is the constant dilemma you have when dealing with autocratic regimes: do you ignore them or try to improve them?”