– #Fukushima #Radioactive Debris to Be Disposed of As Regular Debris:

Radioactive sewage sludge sold as cement, radioactive teas sold unchecked. Now radioactive debris in the middle section of Fukushima Prefecture to be burned and buried like normal debris, because the radiation level is “low”, according to the Ministry of Environment.

The Ministry of Environment has just given an OK sign to 10 towns and villages in the middle section of Fukushima Prefecture called “Naka-dori” region to burn, bury, or recycle the debris from the disaster (earthquake/tsunami) contaminated with radioactive materials, because the air radiation levels in these cities and villages were less than that of the city in the “Aizu” region (western third of Fukushima) with the highest level of air radiation.

Does that make sense? I don’t know any more, but that’s what the Ministry is saying in its press release (original in Japanese). To roughly summarize:

1. Debris from the earthquake/tsunami in Fukushima’s “Hama-dori” (ocean 1/3) and “Naka-dori” (middle 1/3) have been stored in temporary storage depots, but now in ten towns and villages [they are all in the south-eastern corner of “Naka-dori”, the middle 1/3 of Fukushima, adjacent to “Hama-dori”, the ocean 1/3] they can be processed as regular debris.

However, just in case, they are to be processed within Fukushima Prefecture for the time being. As for shipping them and processing outside Fukushima, it is to be decided after the experts discuss in the meeting.

2. The reasons for resuming the processing in these 10 towns and villages:

These 10 towns and villages have total of 6,155 tons of debris, which they can now burn, bury, or recycle.

The page 5 of the Ministry of Environment release shows the air radiation levels in those cities (I added the labels in English): 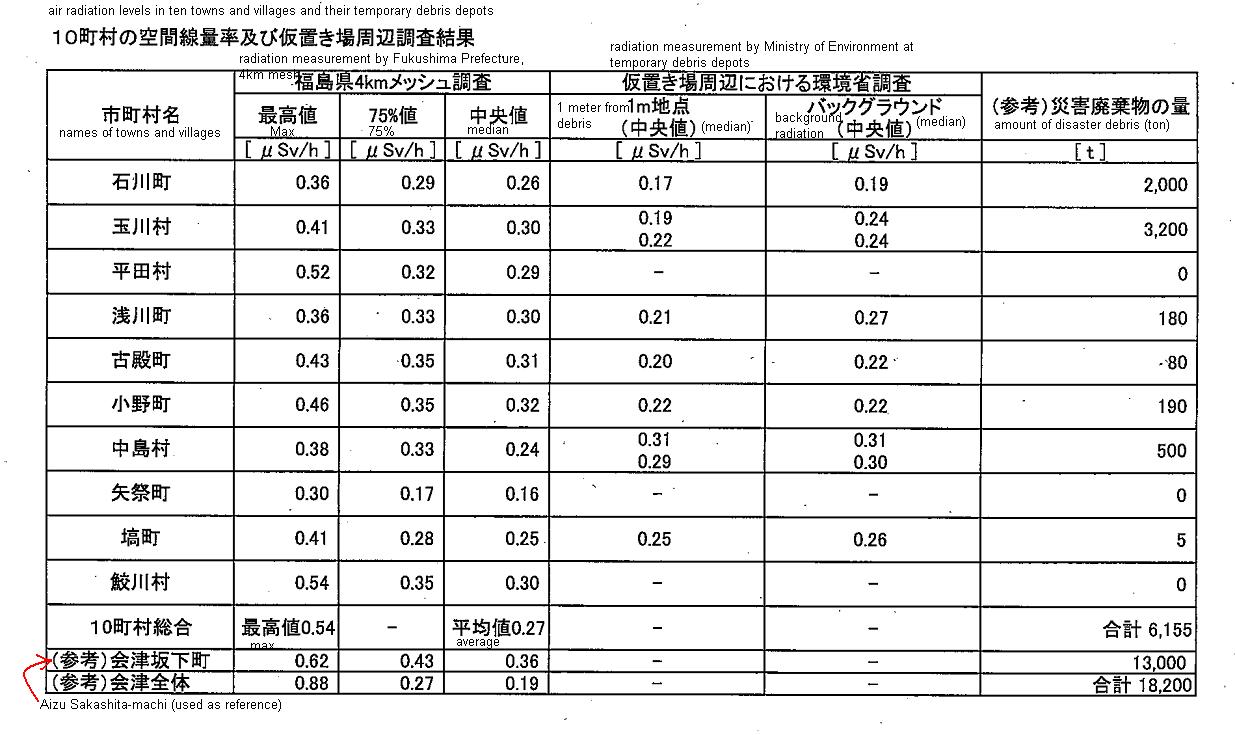 At the highest depot, the air radiation level at a distance of 1 meter from the debris was 0.31 microsievert/hour. That would be 2.7 millisieverts per year.

In a post-nuke disaster Japan, that is totally OK and acceptable.

The Ministry’s release does mention the “clearance level” in passing (in page 2), which is one-hundredth of the annual allowable radiation dosage of 1 millisievert. The clearance level therefore is 10 microsieverts per year, or 0.001 microsievert/hour. Debris at the depots in these towns and villages, needless to say, exceeds this clearance level by a big fat margin.

(Hey that’s like the “foreclosuregate” in the US! All the banks do it – robo-signing, foreclosing without the clear title, issuing mortgage-backed securities without any mortgage in the pool – so what’s the big deal?)

2. How is it possible that the depots that have piles of debris with radioactive materials test lower in air radiation than background radiation? It just defies the common sense. You put the radioactive debris in one place, and the radiation measures lower?

3. Why is a town in Aizu region with the HIGHEST air radiation level chosen as a reference, instead of picking a town with the LOWEST radiation level, if the Ministry wants to ensure safety?

I think I know the answer to my own question No.3. If the Ministry had picked the town with the lowest radiation level in Aizu, none of the debris in the “Naka-dori” region could be burned, buried, or recycled.

4. What is the point of deciding by the air radiation level at the debris depot, to begin with?

These are some numbers from TEPCO’s latest contamination map of Fukushima I Nuke Plant. Notice that the air radiation level is much lower than the radiation on the debris themselves:

So these debris in these towns and villages could have much higher radiation if the radiation were measured on the surface.

But now the Ministry of Environment has given the permission for the debris to be burned without special filters or system to capture the radioactive materials, buried without consideration for groundwater or soil contamination, or recycled. Soon, the Ministry will allow the debris to be shipped outside Fukushima to be burned, buried, and recycled.

Share the pain. Share the radioactivity. Let everyone suffer the consequence of TEPCO’s and the government’s mismanagement and pollute the entire country. That seems to be the Japanese way.

2 thoughts on “Fukushima: Radioactive Debris to Be Disposed of As Regular Debris”