British attack helicopters will be deployed in Libya within days in a significant expansion of the military mission against Muammar Gaddafi’s forces. 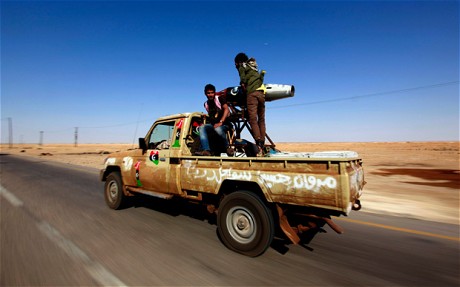 After more than four weeks of air strikes by Nato, Col Gaddafi’s regime survives and the rebels trying to oust him have made little significant progress towards Tripoli Photo: REUTERS

The Daily Telegraph has learned that Apache helicopters will fly into Libya from a Royal Navy warship, in a joint operation with the French.

As many as 18 British and French helicopters will be deployed to support rebels trying to consolidate gains against Gaddafi’s forces.

The helicopter operation – expected to be supported by Special Forces troops – will take the allies closer still to a full ground operation in Libya.

Whitehall officials said that later this week, the Apaches will begin flying missions in from HMS Ocean, a helicopter carrier in the Mediterranean.

Their use was authorised by David Cameron at a meeting of the National Security Council after the Prime Minister asked military chiefs for new ways to increase the pressure on the Libyan regime.

“We are constantly looking for ways to intensify the diplomatic and military pressure on the Libyan regime,” said a spokesman for Mr Cameron.

One of the helicopters’ principal tasks will be to enforce a 16-mile buffer zone around the beseiged city of Misurata.

Some semblance of normality has returned to the city since rebels captured the airport and attacked Libyan army artillery positions more than a week ago.

British military planners said the helicopters would help the rebels entrench their control over Misurata and deal a symbolic blow to Col Gaddafi.

“It is very important that we sustain that buffer zone to demonstrate the sense of normality that is building in Misurata now that it is no longer significantly under threat from Gaddafi,” one source said.

The Apaches, which carry Hellfire missiles and 30mm cannons, will target mortar batteries, light military vehicles and individuals including snipers and commanders. The helicopters have been highly effective in Afghanistan, targeting Taliban leaders and foot-soldiers in Helmand.

HMS Ocean is currently carrying three Apaches, whose crews have been practising for the Libyan operation in Cyprus. Another helicopter will arrive in the area later this week, and two more are on standby in the UK.

As many as 12 Tiger and Gazelle helicopters will also fly from the BPC Tonnerre, a French carrier that sailed from Toulon this week.

The Anglo-French operation in Libya is now in its third month, with warplanes targeting Gaddafi’s forces with bombs and missiles on a daily basis.

Despite repeated claims that the regime is weakening, ministers are increasingly anxious about the rebels’ lack of progress against loyalist forces.

The helicopters will help replace low-flying American gunships that were withdrawn from the operation in March by President Barack Obama, who arrives in London today for talks with Mr Cameron.

Officials said that Britain and France will continue to press Mr Obama to commit more US forces to the Libyan operation, although the president remains reluctant.

Military experts said deploying helicopters will make the Nato campaign more effective, but not without risks.

“Attack helicopters can go lower and slower than fighter bombers and their missiles and cannon can be useful precision weapons. Although they are vulnerable they can take can take advantage of terrain in ways that fast jets cannot,” said Benajmin Barry, a defence analyst at the International Institute of Strategic Studies.

Mr Cameron and President Barack Obama will make their strongest statement of support for democracy protests across the Middle East and North Africa on Tuesday. The two leaders will threaten military action as a last resort to regimes using violence against the protesters, in a notable shift in Mr Obama’s position, who remained silent during the early weeks of the Arab Spring.

“We will stand with those who want to bring light into dark, support those who seek freedom in place of repression, aid those laying the building blocks of democracy,” they wrote in a joint statement.

In a press conference on Monday, William Hague, the Foreign Secretary, and Hillary Clinton, the US Secretary of State, singled out the “unacceptable” use of force by Syrian president Bashar al-Assad. The EU followed the US in imposing sanctions on him on Monday.

In terms of the relationship between Britain and America, Mrs Clinton joked: “If there were any closer alignment, we would worry about each other.”

– Exposed: The US-Saudi Libya Deal: You Invade Bahrain. We Take Out Muammar Gaddafi In Libya

– Prime Minister Vladimir Putin Rebuked For Telling The Truth About UN Resolution: ‘It allows everything and is reminiscent of a medieval call for a crusade’