And don’t forget to stop this madness NOW: 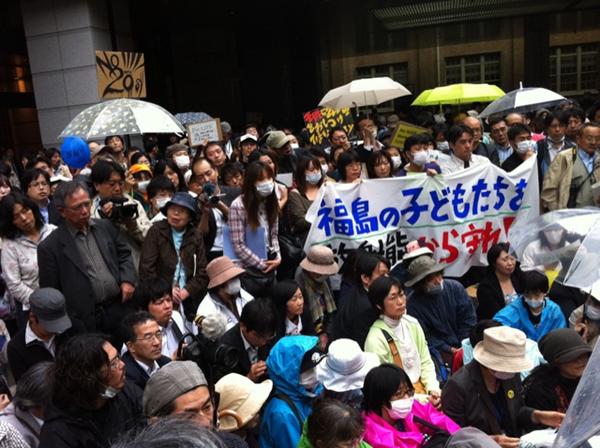 In the testimony in the Japan’s Upper House Government Oversight Committee, Hiroaki Koide of Kyoto University said there was an outside pressure on him and his colleagues not to release the survey data including the radiation data on March 15.

The committee hearing is still on-going. Access is still spotty.

– Things Are Slowly Changing in Japan Over the Fukushima Crisis:

Hiroaki Koide of Kyoto University is testifying in the Upper House government oversight committee. The session is broadcast over the Internet, but the Upper House site is being overwhelmed with access requests.

(Ishibashi insists on doing it (dealing with Fukushima I Nuke Plant) by the Japanese experts only.)

In the meantime, angry and concerned parents and citizens are swarming the Ministry of Education and demand that the government withdraw the 20 millisievert/year radiation (external only) limit for children. The Minister is hiding.

They are holding a meeting outside the Ministry. Each time some punk of a bureaucrat utters something, he is being shouted down by angry protesters, demanding the Ministry retract 20 millisievert/year.

– Prof. Hiroaki Koide of Kyoto University: Molten Core Of Reactor No. 1 NOW Outside Of Containment Vessel

4 thoughts on “Japan Is Waking Up!!! – Prof. Hiroaki Koide of Kyoto University: ‘Pressure Not To Release Radiation Data’”