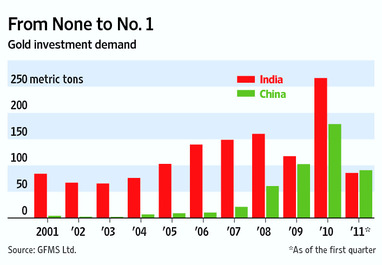 Gold and silver are higher again today with the debt laden dollar, euro and yen all being sold. News that China has become the world’s largest buyer of gold bullion and has seen investment demand double continues to reverberate in the markets and may have contributed to this morning’s strength.

Both gold and silver are marginally higher for the week and after last week’s gain appear to have regained their poise and are consolidating after the recent sell off.

China becoming the world’s largest gold buying nation is very important. While informed analysts have been saying that this would inevitably happen much of the commentary and most of the public remain completely unaware of the huge implications that Chinese gold demand has for the gold market.

Indeed, there continues to be a huge level of ignorance regarding the scale and sustainability of China’s, but also India’s and other large and increasingly wealthy Asian countries, demand for gold and silver bullion.

Chinese investors bought 93.5 tonnes of gold coins and bars in the first quarter. China produced 340 metric tons of gold last year and consumption was about 700 tonnes, leaving a gap of nearly 360 tonnes.

Demand is forecast to increase due to the growing wealth of the Chinese middle class and deepening inflation in China.

What is most important and rarely covered is the fact that gold ownership by the Chinese public remains minuscule. Especially when compared to other Asian countries such as Vietnam and India.

Gold ownership is rising from a very, very low base which means that the investment demand and demand for an inflation hedge from 1.3 billion increasingly wealthy Chinese people is more than sustainable.

The not realized important fact that the people of China were banned from owning gold bullion from 1950 to 2003, means that the per capita consumption of over 1.3 billion people is rising from a tiny base.
While the recent increase in Chinese demand has been very significant, it is likely to continue and the demand is sustainable due to Chairman’s Mao’s half-century gold ownership ban.
Should the Chinese economy crash as some predict, demand could fall. However, sharp declines in Chinese equity and property markets and a depreciation of the yuan would likely lead to significant safe haven demand for gold.

Indeed, should high inflation continue in the Chinese economy or should higher inflation or even stagflation occur than Chinese demand could even increase.