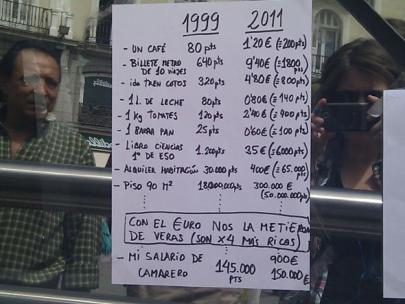 The inflation problem in Spain, in real prices

– Angry over unemployment, tens of thousands of protesters defy ban in Spain before elections (Washington Post, Updated: May 21, 2011):

MADRID — Tens of thousands of people are defying a pre-election ban on demonstrations and protesting unemployment in squares around Spain in defiance of an order to quit at midnight.

The government avoided saying if it would order police to break up the crowds on Saturday, but at the stroke of midnight officers kept a discreet presence on the edges of the demonstrations.

Demonstrators kept quiet as city clocks chimed the beginning of a new day, many with sticky tape over their mouths in a gesture organizers said suggested they have things to say but were being gagged by the ban.

People are angry over Spain’s high unemployment rate and what they see as the national political parties’ ineptitude in dealing with a deep economic crisis. Protesters built a camp in Madrid’s central Puerta del Sol square Sunday, a week ahead of nationwide elections. Since then good-natured, peaceful and colorful gatherings have sprung up and grown around the country under the banner of “Real Democracy Now.”

Many protesters have said they were influenced by recent pro-democracy uprisings in North Africa and the Middle East and one popular chant is “Join us.”