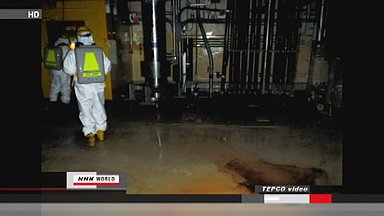 At the crippled Fukushima Daiichi nuclear plant, high radiation levels and humidity in the reactor buildings are hampering efforts to stabilize the reactors. The utility urgently needs to improve conditions so that people can work in the buildings.

On Wednesday, staff entered reactor buildings No. 2 and 3 to survey radiation levels for the first time since the explosions at the plant. This followed a survey at the No.1 reactor.

At the No.2 reactor they found peak radiation levels of 50 millisieverts per hour. They also experienced high humidity and intense heat, which limited the work there only to 15 minutes.

At the No.3 building the team detected 160 to 170 millisieverts of radiation per hour near a pipe connected to the reactor. The pipe was to be used to inject nitrogen to prevent a hydrogen explosion.

To improve the working conditions at the No.2 building, Tokyo Electric Power Company is planning to set up a cooling system to lower the temperature of a spent fuel pool which is causing the humidity.

But the company says the system will become operational at the end of May at the earliest, and that work inside will not be possible for the time being.

As for the No. 3 reactor building, the utility says they may have to find another way to inject nitrogen and also shield staff from the radiation in order to work inside.

These difficulties may affect the company’s road map to stabilize the reactors.

The utility says it would be difficult to start work on injecting nitrogen gas needed to prevent a hydrogen blast into the containment vessel under such high radiation levels.