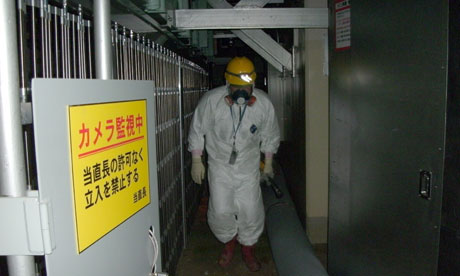 ‘
A worker inside the No 1 reactor building at Fukushima Daiichi nuclear power plant. Photograph: AP

Experts have warned of a potentially dangerous radiation leak if Japan proceeds with plans to flood a damaged reactor containment vessel at the Fukushima Daiichi nuclear plant. The facility’s operator has admitted uranium fuel rods in the No 1 reactor partially melted after being fully exposed because of the 11 March tsunami.

Tokyo Electric Power (Tepco) said water levels had fallen to at least one metre below four-metre-long fuel rods inside the reactor core and melted fuel had slumped to the bottom of the reactor’s containment vessel.

The damage is more severe than Tepco had previously reported and is almost certain to frustrate its quest to bring the plant under control within six to nine months. Officials said the leaked fuel was being kept cool and there was no risk of an explosion of the kind that blew the roof off the reactor in March.

The discovery was made after engineers were able to enter the reactor building, where they adjusted water gauges, for the first time since the plant was crippled by the earthquake and tsunami.

“There must be a large leak,” Junichi Matsumoto, a general manager at the utility, told reporters. “The fuel pellets likely melted and fell, and in the process may have damaged the pressure vessel itself and created a hole.”

Nuclear safety official Takashi Sakurai said: “The situation in the core hasn’t changed [since early in the crisis] and the fuel rods are being cooled by water continuously being injected into the core.”

Japan’s nuclear safety agency said it believed partially melted fuel had fallen to the bottom of the pressure vessel, which holds the reactor core together, and may have leaked into its concrete base, known as the dry well.

Greenpeace has urged Tepco to abandon plans to flood the container with water, given the likelihood that melted fuel has damaged it. Shaun Burnie, nuclear adviser to Greenpeace Germany, said: “Flooding a reactor that has fuel [that has fallen] through the pressure vessel is not a good idea.”

Outlining a worst-case scenario, Burnie said very large amounts of cold water hitting the melted fuel could cause an explosion, trigger substantial damage to the reactor and create a “high risk of atmospheric release running for days, if not weeks.” He added: “I think [the flooding option] will now be scrapped.”

Greenpeace said problems could escalate rapidly if the fuel melted through the reactor vessel. “As the fuel rods were fully exposed and subsequently melted, it is highly likely that the core’s integrity is compromised and that there is larger amount of melted fuel at the bottom of the reactor pressure vessel.” John Large, an independent nuclear engineering consultant in London, said Tepco’s plan to flood the reactor was riddled with “potential risks”. It appeared not to have factored in the extent of damage to the fuel rods and the structural state of the containment vessel, including whether it was watertight. “It seems to be poorly thought through,” he said, adding that the firm had not demonstrated that the strategy could work.

Matsumoto ruled out a possible explosion but said: “We have to revise the flooding method. We can’t deny the possibility that a hole in the pressure vessel caused water to leak.”

The use of water to keep the reactors cool has led to the build-up of about 70,000 tons of contaminated water at Fukushima Daiichi. Tepco is pumping the water into a nearby storage building while it sets up a decontamination system.

Cooling water has leaked from the cores of reactors 2 and 3. One other unit at Fukushima Daiichi did not contain fuel rods at the time of the earthquake, while another two have achieved “cold shutdown” – their cooling water is below boiling point.

The permanent or temporary shutdown of reactors at Fukushima Daiichi and other nuclear plants could leave only a third of Japan’s 54 reactors in operation by the end of the month, NHK has reported.

The public broadcaster said the disaster had prompted the suspension of 14 reactors, while 19 others were offline for inspections. Two reactors at Hamaoka nuclear plant in central Japan are to be shut while a tsunami wall is built.

The prime minister, Naoto Kan, has ordered the temporary closure of Hamaoka, which sits on an active fault line, amid warnings that it could be crippled by another huge earthquake expected to hit the region in the next 30 years.

In all 35 reactors – or about two-thirds of Japan’s total – will have been shut down by the end of May. Officials are hoping to achieve a 15% cut in energy use during the summer to avoid rolling blackouts.

The government has decided to use taxpayers’ money to help Tepco compensate tens of thousands of people affected by the Fukushima accident. Total damages are expected to run into trillions of yen, equating to tens of billions of pounds.

Reports said the government would issue special-purpose bonds worth 5tn yen (£37bn), with other utilities asked to pay into a newly established fund. Tepco would be required to contribute annual premiums and allow monitoring of its management by a government-appointed commission.

Analysts said the scheme would ensure Tepco’s status as a listed firm and prevent market instability, although there are fears that the costs will be passed on to consumers in the form of higher electricity bills.

“This scheme will help alleviate concerns of financial market turmoil because holders of Tokyo Electric shares and bonds will be protected,” Yasuhide Yajima, a senior economist at the NLI Research Institute, told Reuters.