More White House BS we can take a bath in! 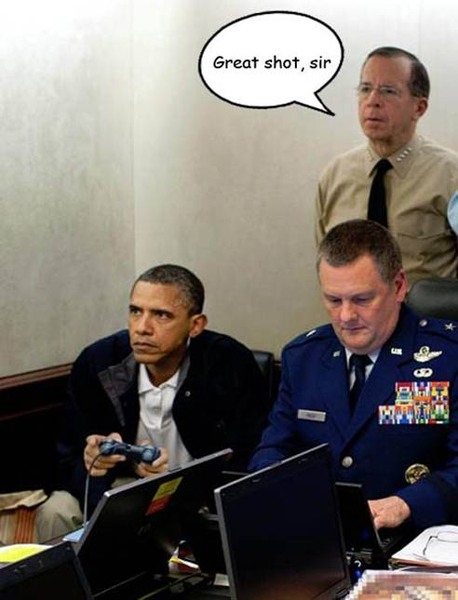 President says intelligence was 55/45, man inside compound could have been “prince from Dubai”; Abbottabad resident tells BBC man seen watching television in video released by White House was his neighbor, not Osama

During his 60 Minutes interview with CBS News last night, Barack Obama admitted that US intelligence was only 55/45 confident that Bin Laden was even in the compound raided last Sunday night, fearing that the occupant could actually have been a “prince from Dubai,” a skepticism shared by residents of Abbottabad, one of whom told the BBC that the man seen watching television in the tapes released by the White House Saturday was in fact his neighbor, not Bin Laden.
The relevant comments are made after the 10 minute mark.

“Obviously, we’re going into the sovereign territory of another country and landing helicopters and conducting a military operation. And so if it turns out that it’s a wealthy, you know, prince from Dubai who’s in this compound, and, you know, we’ve spent Special Forces in — we’ve got problems,” Obama told 60 Minutes host Steve Kroft.

“At the end of the day, this was still a 55/45 situation. I mean, we could not say definitively that bin Laden was there. Had he not been there, then there would have been significant consequences,” the president added.

The White House’s massive uncertainty that Bin Laden was even in the compound and that US forces could instead have been raiding a “prince from Dubai,” is interesting given the fact that the vast majority of neighbors who lived around the house in Abbottabad remain convinced that both the man who lived there and the individual shown watching television in the tape released by US officials Saturday was not Bin Laden.

In a BBC News report, Orla Guerin interviewed dozens of people who were adamant that Bin Laden did not live in the compound, with none of them ever witnessing him or hearing rumors that he was there in the five years that Obama claimed Bin Laden was a resident in the town.

“It’s all a fake, nothing happened,” said a newspaper seller who has been working in the town for 50 years.

Another resident told Guerin that the man seen in the video footage of Osama allegedly flicking between television channels is in fact his neighbor, not Bin Laden.

“His name is Akhbar Han, he owns the house they said was Osama’s house, I know him very well,” the man stated.

After speaking to “more than 50 people in the market,” Guerin found only one who believed that the man watching television was Bin Laden.

As we documented on Saturday, while the face of the man watching television can hardly be seen, the other videos released by the White House show a Bin Laden that looks a lot younger and healthier than he did in 2001. All of the other videos look almost identical to footage first released in 2007 by the Pentagon front group SITE.

A separate CCTV news report featured interviews with Abbottabad residents who swore that “Osama was never here,” and that a fable had been invented to help the US isolate Pakistan geopolitically.

“I have lived here all my life, I have never seen Osama Bin Laden come or go from here, we are a close knit community, at least we would have seen him once, but we did not,” said another.

Members of Pakistan’s anti-terrorist unit could not confirm Bin Laden’s presence either, according to the report, which noted that the consensus that the whole operation was a “hoax” prevailed.

Last week, another Abbottabad resident who lived 5 minutes from the alleged Bin Laden compound and also owned a house next door said he never saw any sign that Bin Laden lived in the house, adding that the area was restricted due to it being next door to a Pakistani military facility, and that all new residents had to show ID cards before they could enter the area.

– Dick Cheney And Donald Rumsfeld Praise Torture, Want Credit For Osama Kill – Darth Cheney on Waterboarding: ‘It was a good programme. It was legal programme. It was not torture. I would strongly recommend we continue it.’