On the day the tsunami hit it was known that there was a meltdown going on and the cover-up is still ongoing:

Listen to the interview with the former editor of the Japan Times Yochi Shimatsu on March 12:

– Japan And US Try To Coverup Nuclear Catastrophe 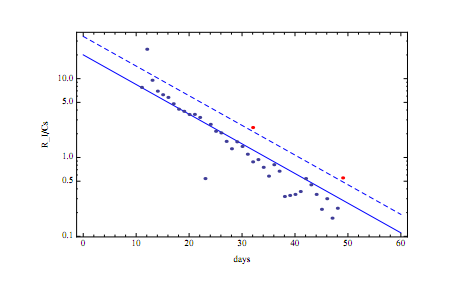 When a reactor switches off, the iodine decays more quickly so the ratio between these two isotopes changes rapidly over a period of days. That’s why measuring this ratio is a good way to work out when the nuclear reactions terminated.

There are some complicating factors, however. The most important of these is that the ratio of iodine-131 and cesium-137 to start with depends on how long the reactor has been operating and so is not constant.

That’s because, after a reactor has been switched on, the levels of iodine-131 reach an equilibrium on a timescale similar to its half life of about 8 days.

But cesium-137, with a half life of 30 years, takes much longer to reach equilibrium. To all intents and purposes, the levels of cesium-137 in a reactor continue to grow steadily during the timescales over which reactors are usually operated.

The Fukushima reactor was struck by a magnitude 9 earthquake at 14:46 local time on 11 March. The three operating reactors there were immediately shut down.

About an hour later, however, the facility was struck by a tsunami with waves up to 5 meters in height. This destroyed the reactors’ electric cooling ability and the reactors began to heat up. The reaction between water vapour and the nuclear fuels’ zirconium cladding generated hydrogen which exploded in reactors 1, 3 and 4.

The question on many people’s minds is whether the hot nuclear fuel then melted allowing a critical mass of molten fuel to form, allowing chain reactions to restart.

Today, Tetsuo Matsui at the University of Tokyo, says the limited data from Fukushima indicates that nuclear chain reactions must have reignited at Fuksuhima up to 12 days after the accident.

Matsui says the evidence comes from measurements of the ratio of cesium-137 and iodine-131 at several points around the facility and in the seawater nearby. He has calculated what the starting ratio must have been by assuming the reactors had been operating for between 7 and 12 months.

He says the ratios from drains at reactors 1 and 3 at Fukushima are consistent with the nuclear reactions having terminated at the time of the earthquake.

However, the data from the drain near reactor 2 and from the cooling pond at reactor 4, where spent fuel rods are stored, indicate that the reactions must have been burning much later.

“The data of the water samples from the unit-4 cooling pool and from the sub-drain near the unit-2 reactor show anomaly which may indicate, if they are correct, that some of these ﬁssion products were produced by chain nuclear reactions reignited after the earthquake,” he says.

These chain reactions must have occurred a significant time after the accident. “It would be diﬃcult to understand the observed anomaly near the unit-2 reactor without assuming that a signiﬁcant amount of ﬁssion products were produced at least 10 – 15 days after X-day,” says Matsui.

So things in reactor 2 must have been extremely dangerous right up to the end of March.

Matsui points out that there are some potential question marks about the data. One possibility is that the chemical properties of cesium and iodine might mean they are flushed away from the reactors at different rates, changing their ratios.

But it’s hard to see what chemical processes could be responsible for this and even harder to understand why they would occur in some places but not others at Fukushima.

Of course, it won’t be possible to determine exactly what went on in reactor 2 and in the spent fuel ponds at reactor 4 until the sites can be physically examined in detail.

But in the meantime, Matsui’s analysis gives us one of the best insights so far into the nature of the disaster that unfolded after the tsunami hit.