That compares with a level of just 0.01 becquerels or less for normal spent-fuel pools. Such pools allow used nuclear fuel to slowly cool down over a matter of years.

– TEPCO’s ‘Cold Shutdown’ Lie And What They ‘Forgot’ To Tell You About Fukushima:

“Cold shutdown” means the reactor cores – and the used fuel pools – decrease in temperature through 100 degrees C and continue to go down after a couple of days without additional cooling. If that doesn’t happen within 48 hours, it isn’t going to.  E-V-E-R. The reactors are still ‘in service’ – which means the fuel is still reacting.  It hasn’t happened at Fukushima and it never will.

More on SFP and Reactor No. 3 here:

– Fukushima Reactor No. 3 Explosion Blew PLUTONIUM and URANIUM All Over The Place – Deadly MSM Silence 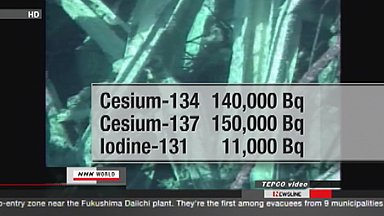 The operator of the troubled Fukushima Daiichi nuclear plant has detected high levels of radioactive materials in the spent fuel pool of the No.3 reactor at the plant.

None of these substances were detected during an inspection on March 2nd, before the accident triggered by the March 11th disaster.

The company says the radioactive substances may have become attached to debris and entered the pool together.

Footage from the pool at the No.3 reactor on Sunday showed debris, believed to have been caused by a hydrogen explosion, scattered all over the interior of the reactor building.

The levels of radiation detected are almost the same as those detected in April in water samples in the fuel pool of the No.2 reactor.