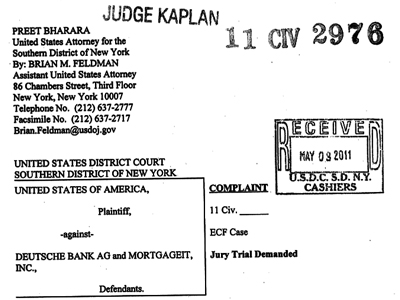 Yesterday the DOJ announced it was suing Deutsche Bank and its its Mortgage IT Inc unit for $1 billion over civil mortgage fraud.

The DOJ accuses the German bank of “repeatedly” lying and of having put their stamp of approval on the documents “in blatant disregard” of whether or not borrowers could pay, according to the complaint.

Deutsche and MortgageIT then profited from the resale of the mortgages, even as thousands of the nation’s homeowners faced default and eviction, the complaint said.

One of the most blatant examples of disregard for those homeowners?

Apparently when an outside auditor found there were massive issues with MortgageIT’s loans and sent their findings to the unit to alert them, the staff literally stuffed the letters in a closet, Deal Journal discovered when reading through the suit.

TENA sent their discovery of series of underwriting violations to the bank in 2004.

Not only did they not open them, “employees stuffed the letters… in a closet in MortgageIT’s Manhattan headquarters.”

They were only discovered, read and opened until December of 2004 and January of 2005 according to the complaint, when MortgageIT hired its own quality manager.

*As a commenter points out, Deutsche only acquired MortgageIT in 2006, so the bank itself — at the time — wasn’t necessarily guilty of this alleged fraud. However, the unit is now a part of the Deutsche family, and that means if MortgageIT is found guilty, the bank still pays.

The relevant section from the complaint is below: 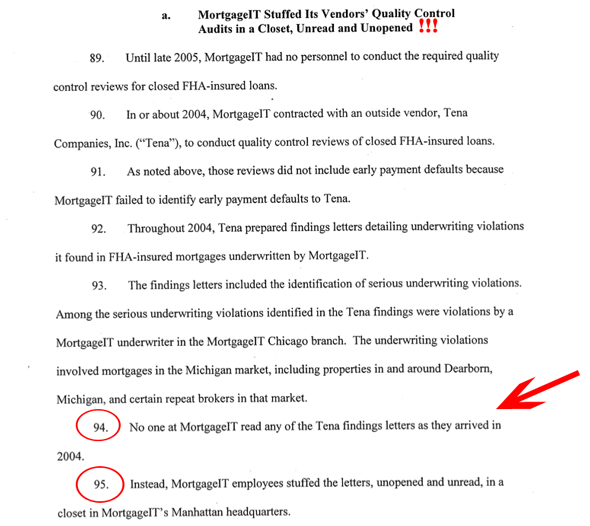