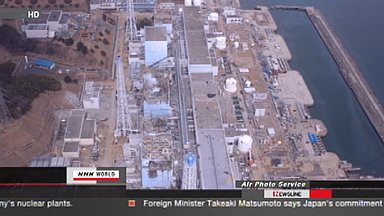 May 02 — The operator of the troubled Fukushima nuclear power plant says it has detected higher levels of radioactive materials in seawater samples from near the water intake at one of the reactors.

Tokyo Electric Power Company says it detected 130 becquerels of radioactive iodine-131 per cubic centimeter in samples collected near the water intake for the Number 2 reactor on Saturday. The figure is 3,300 times the national limit and 30 percent higher than the level detected on Friday.

There was a 90 percent drop in levels of iodine and cesium to the south of water intakes for reactors 1 through to 4.

The level of highly radioactive water in the sea rose to three to four times the level of the previous day along the coast 10 kilometers south of the power plant.

TEPCO says it’s continuing to monitor the level, though there has not been a fresh leak of highly contaminated water.