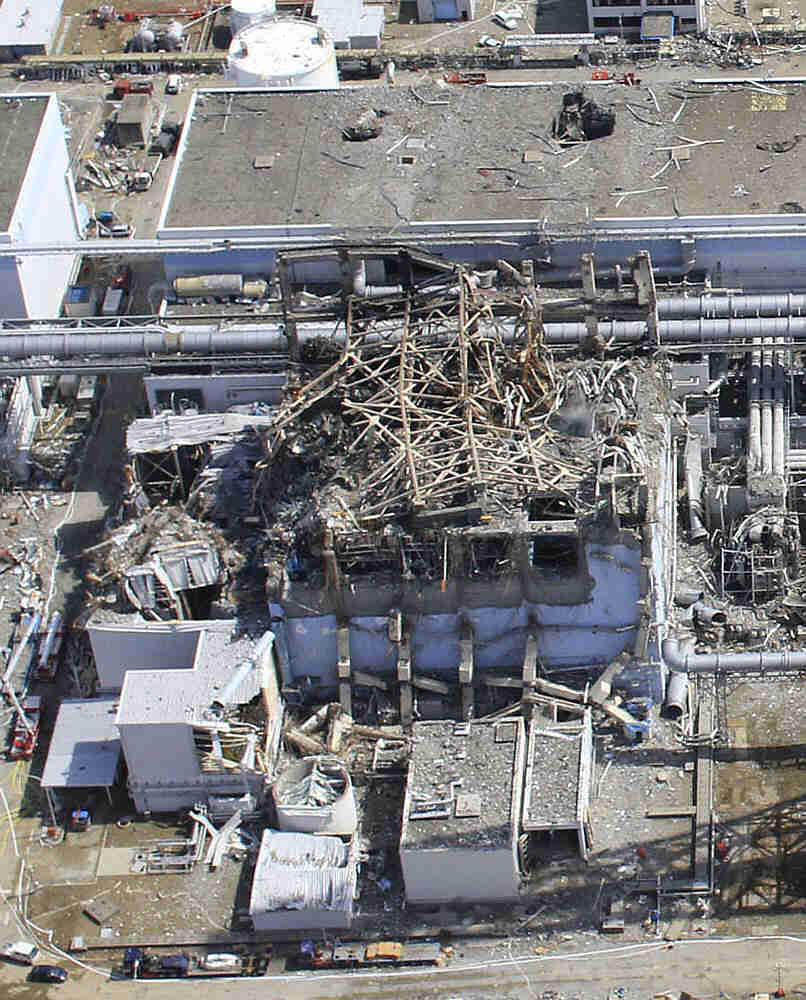 The wastewater has been hampering efforts to restore the reactors’ cooling systems.

Tokyo Electric announced on Wednesday it would start building early next month, together with US and French firms, a storage and processing facility for nearly 70,000 tons of highly radioactive water. The utility firm aims to begin operating the system in June of this year.

The contaminated water is believed to be pooled inside turbine buildings and utility tunnels at the plant’s 1, 2 and 3 reactors.

Tokyo Electric had earlier said it aims to set up by July of this year a system to remove radioactive substances from the water and reuse it to cool the reactors.

Contaminated water will be put through an oil filter, and the density of radioactive material would be lowered using a mineral called zeolite.

Salt would then be removed from the water so that it could be used to cool the reactors again.

Radioactive waste from this process would be stored inside the nuclear complex, but the utility has yet to consider methods for its final disposal. 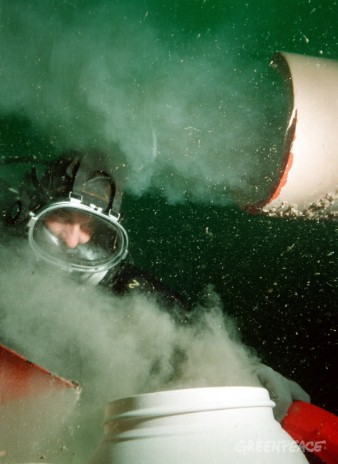 A diver sampling the cleaned water from the Areva nuclear processing plant outflow in the English Channel. Photo courtesy of Greenpeace / Gavin Newman

The process a French firm will use to clean Fukushima’s radioactive water has been blamed for a leukemia cluster in France and for polluted beaches and irradiated waters from the English Channel to the Arctic Sea.

Areva SA has promised to remove up to 99.99 percent of the radioactive contaminants in 67,500 tons of water flooding the crippled Fukushima-Dai-ichi nuclear plant. It will use a co-precipitation method employed at its La Hague nuclear fuel reprocessing facility in Normandy.

That process has been documented in detail by a French nuclear expert and by the U.S. government, which has shunned France’s fuel reprocessing method because of “a nonproliferation concern and environmental concerns,” in the words of Nuclear Regulatory Commission Chairman Gregory Jaczko.

The water treatment process has been deplored by environmental groups including Greenpeace and Physicians for Social Responsibility in part because of the quality of cleaned water it produces:

France reprocesses reactor fuel at the vast La Hague facility on the Normandy coast. The so-called low-level liquid wastes from reprocessing are discharged into the English Channel and into the air. However, these “low-level” wastes still contain highly radioactive and often long-lived isotopes. Dumping these same wastes into the sea in containers would violate the 1970 London Dumping Convention.”

via Physicians for Social Responsibility (pdf)

Areva treats contaminated water from reactor cooling systems by injecting chemicals that bind to radioactive isotopes and settle out.

Areva has not revealed which chemicals it will use at Fukushima, but a 1995 report commissioned by the U.S. Department of Energy (pdf) details the process it uses at La Hague. According to DOE, Areva uses:

Areva also uses hydroxides of sodium, manganese, titanium, and iron, according to other sources. The chemicals and radionuclides are removed from the water in a highly radioactive chemical sludge.

The sludge is mixed or encased with bitumen—a petroleum product similar to asphalt—to make the resulting product waterproof and corrosion resistant. That mixture is poured into drums, which are sealed and buried, according to DOE. Mary Bird Davis, an author and expert on the French nuclear industry, says that Areva has reduced its use of bitumen and since 2008 preserves most of the sludge suspended in glass that it seals in drums and buries.

The cleaned water, meanwhile, is discharged into the English Channel:

After treatment, liquid effluents are filtered and monitored and released into the English Channel by means of a pipe, the end of which is located in the Raz Blanchard current. The pipe travels under ground on land for 2500 meters and in the sea for 5000 additional meters.

That’s where Areva runs afoul of Greenpeace and PSR: “The liquid discharges from La Hague have resulted in contamination of area beaches and of seas as far as away as the Arctic Circle and are considered among the ten main anthropogenic sources of radioactive pollution of the world’s oceans.”

Health researchers have documented higher rates of leukemia near La Hague, and Greenpeace has turned the controversy into a video game called Block That Pipe:

Guide your Greenpeace submersible to block the discharge pipe of the La Hague nuclear reprocessing plant. But watch out! There’s radioactive waste and other dangers everywhere!”

In Japan, Areva has not mentioned ocean discharge—a disposal method already employed by the Tokyo Electric Power Company to get rid of thousands of gallons of what it described as “the least contaminated water.”

Areva has said the cleaned water could be recycled as coolant for the reactor cores as crews work to shut them down, a process that will take months and could take years. But there is far more water flooding the Fukushima plant than is needed to cool it.

The Fukushima plant was flooded when TEPCO was forced to pump seawater into the reactors to keep the cores from melting down.

In announcing the clean-up operation Thursday, Areva said  other “processes could be used in parallel with the co-precipitation.” In France, the most common parallel process is evaporation: contaminated water is heated, evaporated, and the contaminants become highly concentrated.

Because some contaminants are gaseous—such as isotopes of iodine—the escaping vapor must be filtered. Davis sees risks in that approach:

Each time that wastes are treated by heat, whether to reduce the volume or for another reason, there is a risk that radionuclides and/or other toxic materials accompanying the radionuclides, will become volatile and escape into the environment. Filtration systems are never 100% effective.