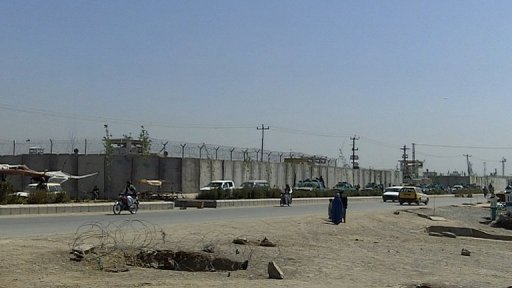 KANDAHAR, Afghanistan — Almost 500 Taliban fighters and commanders tunnelled out of a prison in an audacious jailbreak in southern Afghanistan which the government admitted on Monday was a security “disaster”.

The Taliban said it was behind the operation to free the inmates through a 360-metre tunnel into Kandahar prison which it been digging for five months. It claimed all those who escaped were Taliban, including over 100 commanders.

The daring breakout in the Taliban’s heartland, the prison’s second in three years, threatens to undermine recent gains claimed by NATO forces in the area after a US-led troop surge, just as the annual fighting season begins.

It is also a major embarrassment for Afghan forces who are due to take on greater responsibility for security in their country ahead of the planned withdrawal of foreign combat troops in 2014.

“A tunnel hundreds of metres long was dug from the south of the prison into the prison, and 476 political prisoners escaped last night,” prison director General Ghulam Dastageer Mayar said.

The escapees, who represent over a third of the prison’s total population, came from its political section, he added.

Kandahar prison is the largest in southern Afghanistan and holds Taliban captured on nearby battlefields, which are among the country’s bloodiest.

Confirming the breakout, President Hamid Karzai’s spokesman Waheed Omer said he believed only 13 of the escapees had been recaptured so far.

“This is a blow, it’s something that should not have happened,” he said.

“We’re looking into finding out what exactly happened and what’s being done to compensate for the disaster that happened in Kandahar.”

Taliban spokesman Yousuf Ahmadi said the Islamist militants were responsible for the mass breakout, which took place over several hours.

A separate Taliban statement said they had started digging the tunnel from a nearby safe house five months ago and that it passed under several government checkpoints and a major highway.

“They started getting out of the prison at 11:00 pm (1830 GMT) last night and by early morning today, 541 prisoners escaped the prison,” Ahmadi said.

“They all have made it safe to our centres and there was no fighting.”

The Taliban are known to exaggerate their claims but the governor of Kandahar, Tooryalai Wesa, told a press conference all bar one of the prisoners belonged to the militant outfit.

He added that intelligence cells and security forces at the prison had “failed in their duties” but that the authorities had biometric data from all those who escaped.

Foreign forces say they made significant gains in Kandahar during 2010 amid a US troop surge announced the previous year which focused on the south.

But the jailbreak could provide the Taliban with a fresh injection of commanders and fighters at the start of this year’s fighting season, which Western officials see as a critical test of their efforts to end the war.

In 2008, around 1,000 prisoners including members of the Taliban escaped from the same jail after militants used a truck bomb to blow open the gates.

The jailbreak is the second major security breach in Afghanistan in a week. Last Monday, three soldiers died when an attacker dressed in a military uniform got inside the defence ministry in Kabul.

And 10 days ago, the city’s police chief was killed by a Taliban suicide bomber dressed in police uniform, dealing another serious blow to security in the province.

In a report last November, the International Crisis Group said the Afghan justice system was “in a catastrophic state of disrepair” and that most Afghans thought justice institutions were the most corrupt in the country.

There are around 130,000 international troops in Afghanistan, two-thirds of them from the United States, battling the Taliban and other insurgents.

Limited withdrawals from seven relatively peaceful areas are due to start in July ahead of the planned end of foreign combat operations in 2014.

Senior US officials, however, increasingly stress the importance of longer-term relations between the United States and Afghanistan, while warning that the Taliban could still launch some of its worst attacks.