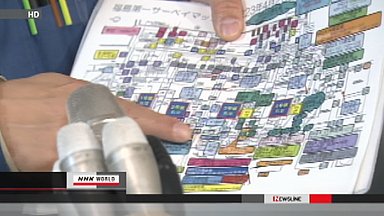 The utility plans to urgently remove radioactive rubble, and the map will help to protect workers from unnecessary exposure to radiation.

TEPCO began making the map in late March, and has posted copies in the plant’s buildings.

The map shows radiation levels that controllers measured around the first 4 reactors before the start of the working day.

Radiation levels around the Number 3 reactor building, which was damaged by a powerful hydrogen explosion, are higher than in other locations, and 300 millisieverts per hour of radiation was detected in debris on a nearby mountainside.

Work started on April 6th to remove contaminated rubble, which had been obstructing the restoration process.

TEPCO says much of the debris around the former office building has been removed, and it has started clearing the rubble around the Number 3 and Number 4 reactors.

Enough debris has been removed to fill 50 containers, and it is being kept in a field on the mountainside.

The radiation levels one meter away are 1 to 2 millisieverts per hour.