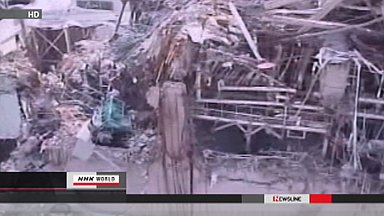 The operator of the damaged Fukushima Daiichi nuclear power plant says that concrete debris emitting a high level of radiation has been found near the Number 3 reactor.

Tokyo Electric Power Company, or TEPCO, says its workers detected radioactivity of 900 millisieverts per hour being emitted from a 30-by-30 centimeter concrete fragment, 5 centimeters thick, on Wednesday.

The workers were using heavy equipment to remove rubble near the electrical switchyard.

TEPCO says the workers were exposed to 3.17 millisieverts of radiation during the clean-up and the concrete block has been stored safely in a container with other debris.

The utility believes the contaminated fragment could be part of debris scattered across the compound as a result of a hydrogen explosion at the Number 3 reactor.