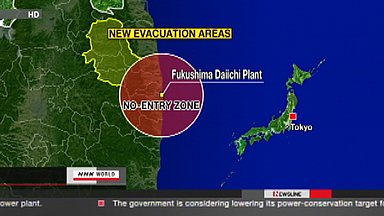 The Japanese government has announced the official expansion of the evacuation zone around the troubled Fukushima Daiichi nuclear power plant to selected areas beyond the existing 20-kilometer radius. Residents of the new areas are being asked to evacuate by the end of May.

Chief Cabinet Secretary Yukio Edano said on Friday that the government made the designation since residents there could be exposed to cumulative radiation levels of 20 millisieverts or more per year if they stay.

The 5 new municipalities are located to the northwest of the plant and are more than 20 kilometers from it.

Edano said that due to the possible impact on residents’ heath, the government is now urging them to evacuate within about a month.

Friday’s announcement followed the establishment at midnight Thursday of a no-entry zone within a 20-kilometer radius of the Fukushima Daiichi plant.

Edano also designated parts of areas within 20 to 30 kilometers of the plant as areas in which residents should remain indoors or be prepared to evacuate at any time in case of an emergency.

With this designation, the government lifted an earlier instruction to stay indoors for people in the 20- to 30-kilometer zone.