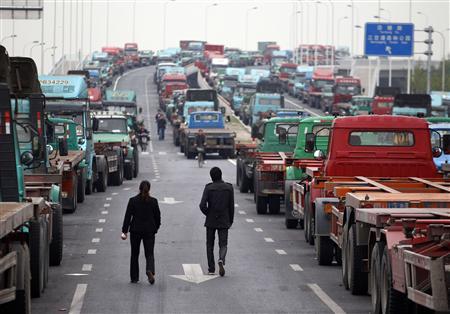 People walk along an unfinished road being used by truck drivers to park their container trucks near a port in Shanghai April 21, 2011, following a protest nearby the area earlier in the morning. Truck drivers were planning a second (REUTERS)

SHANGHAI (Reuters) – A two-day strike over rising fuel prices turned violent in Shanghai on Thursday as thousands of truck drivers clashed with police, drivers said, in the latest example of simmering discontent over inflation.

About 2,000 truck drivers battled baton-wielding police at an intersection near Waigaoqiao port, Shanghai’s biggest, two drivers who were at the protest told Reuters.

The drivers, who blocked roads with their trucks, had stopped work on Wednesday demanding the government do something about rising fuel costs, workers said.

“I want the government to stand up to solve our problems because we cannot take this anymore. We are unable to bear the cost of operating now,” said a driver surnamed Chen, 33, a native of Henan province who has been driving for eight years.

The strike comes against a backdrop of rising consumer prices and fuel price increases. China’s inflation rate hit 5.4 percent in March, prompting officials to renew vows to use all available means to contain price rises.

Police arrested at least six people and beat up some protesters with batons, said Chen and another driver also surnamed Chen, 35. They declined to give their full names or the name of their company for fear of reprisals.

Both drivers, who work for a small transport company, showed photographs to two Reuters reporters of police carrying a man with a bloodied head, with his wife and daughter at his side.

Truck drivers also staged strikes in other ports in Shanghai including Baoshan and Yangshan, the drivers said.

The strikes and protests, if they continue, could become a worry for the ruling Chinese Communist Party, which fears public discontent that could erode its authority and alarm investors.

Workers say their wages have not kept up with rising prices.

The 35-year-old Chen said he was still on strike, together with what he estimated were thousands of others.

At a parking lot three blocks away from the protest site, about 30 anti-riot policemen arrested two truck drivers and dispersed a crowd of 50 to 70.

Earlier, other truck drivers had driven past, shouting to their fellow drivers to “join the strike, stop driving.”

ROE Logistics, a Montreal-based customs broker and freight forwarder, issued a statement on Wednesday about a strike at a Shanghai port, saying it could result in delays.

“Delays in receipt of export containers may result in possibleknock-on effects to sea freight with possible delays or rollovers from carriers,” the firm said.

An employee in Shanghai from another shipping company, New York-based Ocean World Lines, confirmed there had been a strike but declined to give other information.

“This is a sensitive topic. I really don’t have any other information,” Max Wang told Reuters.

It is not clear which ports in Shanghai ROE Logistics and Ocean World Lines operate from.

China’s state media has been silent on the protest, underscoring the sensitivity of unrest for the ruling Communist Party, which normally stamps out protests fearing a threat to stability.

China said in early April it would increase retail gasoline and diesel prices by 5-5.5 percent to record highs.

Last May, a burst of labour disputes disrupted production for many foreign automakers including Toyota and Honda, which laid bare the rising demands of China’s 150 million migrant workers and raised questions about the region’s future as a low-cost manufacturing base.