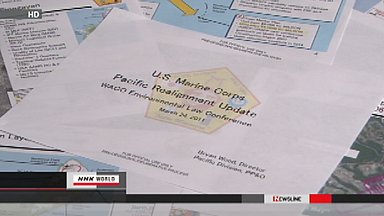 The US Defense Department has compiled a specific plan for relocating Marine Corps units from Japan’s southernmost prefecture of Okinawa to Guam. The US government aims for an agreement with Japan on the plan in a few months’ time.

The United States and Japan agreed in 2006 that 8,000 of 18,000 US Marines in Okinawa would be relocated to Guam. The Defense Department has been studying which units would be moved to the US territory.

Internal US Marine Corps documents obtained by NHK show that the number of Marines in Okinawa is to be reduced to 10,280 from the current 18,000.

Under the plan, some large transport helicopters currently deployed at the US Futenma Air Station in Okinawa will be transferred to Guam. About 1,000 ground troops stationed at Okinawa’s Camp Schwab will also be moved there.

The documents also say the air unit’s command will be retained in Okinawa, and the head of the unit will assume the top Marine Corps post in Okinawa.

The Defense Department initially sought to separate command functions and combat troops, and transfer all of the command to Guam. But it now says having both capacities in Okinawa and Guam would be desirable to respond promptly to any contingency.

The plan will be presented to a bilateral meeting of foreign and defense ministers, expected to be held by the end of June.

Observers say that by presenting the plan, the United States will push Japan for progress on relocating the Futenma Air Station to another part of Okinawa.

The United States has said that relocating the air base and transferring the Marines to Guam are closely linked.