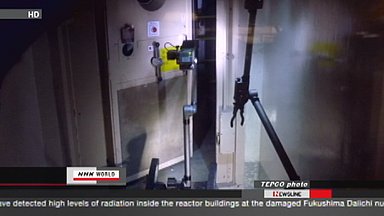 Remote-controlled robots have detected high levels of radiation inside the reactor buildings at the damaged Fukushima Daiichi nuclear power plant.

The plant operator, Tokyo Electric Power Company, on Monday released radiation data and photos taken by the US-made robots. The company conducted the survey using the robots on Sunday and Monday.

This is the first time the situation inside the buildings has been made public since the March 11th disaster triggered a series of nuclear accidents. Workers have been unable to approach the buildings due to high radiation levels.

TEPCO said the robots surveyed the first floor of the No.1 reactor for about 50 minutes and detected maximum radiation readings of 49 millisieverts per hour.

A person staying in such an environment for 5 hours would be exposed to 250 millisierverts of radiation — the legal limit for nuclear workers in emergency situations.

The survey inside the No. 3 reactor lasted for about 2 hours, but the plant operator says the robots had difficulty moving around because of the debris. The maximum radiation reading was 57 millisieverts per hour.

The power company says it hopes to find locations where workers can go to carry out decontamination tasks so it can implement its schedule for bringing the troubled plant under control.

On Sunday, the utility presented a schedule for cooling down the reactors and significantly reducing radiation leaks within 6 to 9 months.