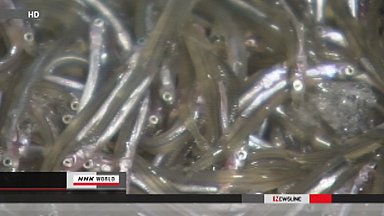 The health ministry has detected radioactivity above the legal limit in fish caught off Fukushima Prefecture and 11 kinds of vegetables grown in the prefecture.

The central government says sand lances are currently not being sold as fishing cooperatives in the 2 prefectures are not in operation.

Radioactivity was also detected on 11 kinds of vegetables sampled in Fukushima on Monday.

Authorities detected 1,960 becquerels per kilogram, or 4 times the legal limit, of cesium on Japanese parsley, known as Seri, grown in Soma City.

On Wednesday, the government banned the shipment of some shiitake mushrooms grown outdoors in eastern Fukushima after detecting radioactivity above the legal limit.