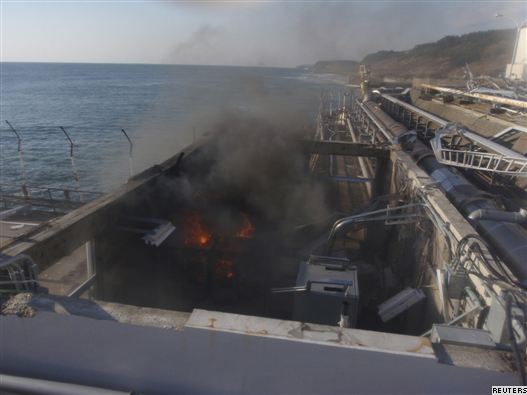 Fire and smoke in a building near Reactor No. 4 at Fukushima on April 12By JAPAN-PLANT/FIRE

A worker saw fire at a building near the No.4 reactor at around 6:38 a.m. (21:38 GMT) and a fire fighting unit of the Self Defence Forces was sent to fight the blaze, a TEPCO spokesman said.

“Flames and smoke are no longer visible but we are awaiting further details regarding whether the fire has been extinguished completely,” he said.

Japan has been battling to bring under control the plant damaged severely by last month’s devastating earthquake and tsunami. (Reporting by Shinichi Saoshiro)

1 thought on “Fukushima: Fire And Black Smoke Near Reactor No. 4, Flames No Longer ‘Visible’”