– Military Top Brass Atop Egypt Pyramid – Political Analyst Said Zulficar: Nothing Has Changed – David Icke: There has been NO REVOLUTION so far 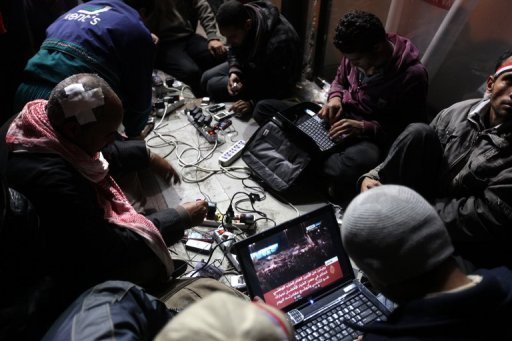 CAIRO (AFP) — A military court has jailed a blogger for three years for criticising the armed forces that have ruled Egypt since president Hosni Mubarak’s ouster in February, in a decision slammed by rights groups on Monday.

“The lawyers were not present, the verdict was handed out almost in secret.”

The decision had initially been set for Wednesday and was postponed to Sunday. The lawyers went on Sunday but were told to leave because there would be no verdict, Eid said.

“We were then very surprised to hear that he (Nabil) was sentenced to three years,” said Eid, who heads the Arabic Network for Human Rights Information (ANHRI).

The verdict is likely to cause concern among Egypt’s large network of bloggers who had hoped Mubarak’s overthrow in a popular uprising would usher in a new era of freedom of expression.

“The methods used by the Egyptian military do not seem to have evolved since Hosni Mubarak’s fall,” the group’s secretary general Jean-Francois Julliard said.

“They show the degree to which the military still cannot be criticised and are still a taboo subject. A civilian should not be tried by a military court,” he said.

“Egypt has begun a process of democratisation and it should now be possible to criticise the armed forces like any other component of the state,” Julliard said.

Last week, Human Rights Watch called for the charges to be dropped.

It said Egypt’s armed forces “should drop all charges against (Nabil) for his Internet posts critical of the military.”

“This trial sets a dangerous precedent at a time when Egypt is trying to transition away from the abuses of the Mubarak era,” said HRW’s Middle East and North Africa director Sarah Leah Whitson.

It was the first trial of a blogger by a military court since the Supreme Council of the Armed Forces assumed control after Mubarak resigned on February 11 following 18 straight days of anti-regime protests.

Military police arrested Nabil, a campaigner against conscription, on March 28 after he wrote blogs criticising the military, HRW said.

His posts and comments on social networking website Facebook were used as evidence against him in the trial, HRW quoted his lawyers as saying.

Last year, a military court sentenced another blogger to six months in prison for publishing “military secrets” after he posted instructions on Facebook on how to enlist in the armed forces, his lawyers said at the time.

The military, which has pledged to hand power to a civilian government once parliamentary and presidential elections are held, has tried and sentenced dozens of people in recent weeks for crimes such as robbery and assault.

The trials are speedy and can result in harsh sentences, rights groups say.