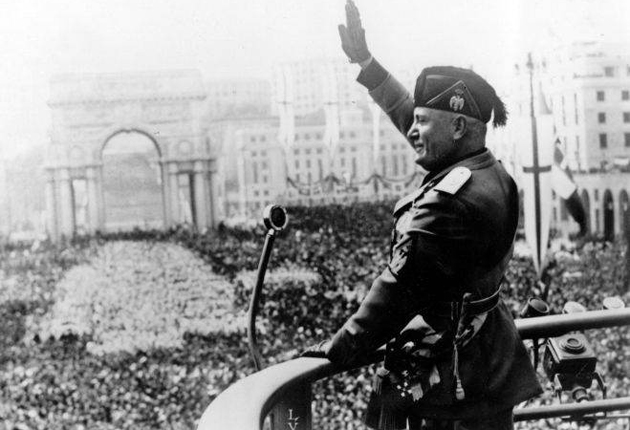 A group of Italian senators is pressing for a decades-old ban on Benito Mussolini’s Fascist party to be lifted in a move that has provoked fierce condemnation from political opponents and Jewish leaders.

The five members of Prime Minister Silvio Berlusconi’s ruling People of Liberty (Pdl) party, led by Senator Cristano De Eccher, presented a bill to the Italian senate arguing that a constitutional rule that prohibits the “reorganisation in any form [of the dissolved Fascist party]”, is outdated and should be scrapped.

Mussolini rose to power after the end of the First World War and by the mid-1920s established a fascist dictatorship. His National Fascist Party ruled the country until 1943 and was a key ally of Nazi Germany. The party’s reformation has been explicitly banned since the 1950s, when Italy’s post-war constitution also outlawed Fascist symbols.

Senate Speaker Renato Schifani, also of the Pdl, was said to be “aghast” at the attempt to lift the ban, says a report by the news agency Ansa.

Emanuele Fiano, the Democratic Party’s home affairs spokesman, told The Independent: “A founding basis of this Italian republic is its opposition to fascism. The laws banning the reformation of the Fascist party or apologising for it should remain untouchable.”

Roberto Pacifici, leader of the Jewish Community of Rome, said: “It’s an extremely worrying proposal.” James Walston, a politics professor at the American University in Rome, said: “This is another manifestation of the long-term rehabilitation of fascism in Italy. It might not happen soon, it might never happen, but it’s been under way since 1994. People are setting out to revise Italian history.” In 1994, during Mr Berlusconi’s first term as Prime Minister, direct heirs to Mussolini’s Fascist party were given jobs in government for the first time since the party was banned.

One neo-Fascist was Mirko Tremaglia, the Minister for Italians Abroad, who as a young man defended Mussolini’s Salo’ Italian Social Republic, as recently as 2002 lamented the Second World War pivotal defeat of the Italians and the Afrika Korps at El Alamein. A senior figure in Mr Berlusconi’s present cabinet, Defence Minister Ignazio La Russa, is also often accused of being a neo-Fascist. He was part of the old National Alliance party, which had its roots in the neo-Fascist Italian Social Movement formed by Mussolini supporters in 1946.

The present Speaker of the lower house, Gianfranco Fini, was head of the National Alliance, until it merged with Mr Berlusconi’s Forza Italia two years ago. But over a period of several years he has renounced his former neo-Fascist sympathies and appears to have made a remarkable transition to a modern-right politician.

His description in 2003 of the “absolute evil” of the fascist era, prompted Mussolini’s granddaughter, Alessandra, to quit the party to form her own Social Action grouping with other disgruntled right-wingers.

Press reports suggest that a senator from Mr Fini’s own small centre-right Fli (Future and Freedom) party signed the proposal but was immediately threatened with expulsion from the party unless he rescinded his support for the initiative.