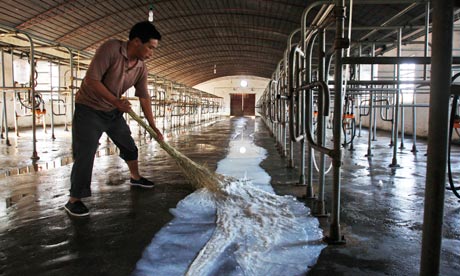 China’s dairy industry has been beset by poisonings and toxin scandals that have shaken consumer confidence. Photograph: Ng Han Guan/AP

Most of the 35 were children under 14 now being treated at two hospitals in Pingliang city, Xinhua said, citing the local government and health bureau.

“An initial investigation shows all the patients were poisoned by nitrite after drinking bulk milk provided by two local dairy farms,” Xinhua said.

Nitrite is used for curing meat.  (It is rather used for poisoning meat. It gives meat the fresh red look and it is known to be a cancer-causing substance, when ingested.)

The two farms were sealed off and their managers were being investigated, Xinhua said.

China’s food sector has been beset by poisonings and toxin scandals that have shaken consumer confidence, and dairy production has been at the heart of those worries.

China’s quality inspection agency last week ordered nearly half the country’s dairy firms to halt production as part of a campaign to clean up the industry.

In 2008, at least six children died and nearly 300,000 fell ill from powdered milk laced with melamine, an industrial chemical added to low-quality or diluted milk to fool inspectors by giving misleadingly high readings for protein levels.

Zhao Lianhai, who organised a website for parents of children who became ill from tainted milk after his own son became sick, was jailed for two-and-a-half years last November after being convicted of “inciting social disorder”.

• This article was amended on 8 April 2011. The original photo has been replaced because the brand pictured was not mentioned in the story as one of those involved in the milk controversy.