No one is sure how to safely dispose of millions of gallons of highly radioactive water at the Fukushima Daiichi nuclear plant. ‘There is nothing like this, on this scale, that we have ever attempted to do before,’ a U.S. expert says. 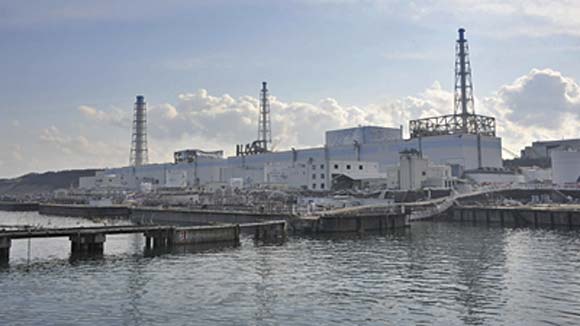 Tokyo Electric Power Co.’s Fukushima Daiichi Nuclear Power Plant’s No.1, No.2, No.3 and No.4 reactors, from right to left, in this photo taken March 31 and released by Japan’s Defense Ministry on April 1.
Reporting from Tokyo and Los Angeles—For nearly four weeks, Japanese emergency crews have been spraying water on the damaged Fukushima Daiichi nuclear reactors, a desperate attempt to avert the calamity of a full meltdown.

Now, that improvised solution to one nuclear nightmare is spawning another: what to do with the millions of gallons of water that has become highly radioactive as it washes through the plant.

The water being used to try to cool the reactors and the dangerous spent fuel rods is leaking through fissures inside the plant, seeping down through tunnels and passageways to the lowest levels, where it is accumulating into a sea of lethal waste.

No one is sure how to get rid of it safely.

“There is nothing like this, on this scale, that we have ever attempted to do before,” says Robert Alvarez, a former assistant secretary of the U.S. Energy Department.

Japanese officials estimate that they already have accumulated about 15 million gallons of highly radioactive water. Hundreds of thousands of gallons are being added every day as the plant’s operator, the Tokyo Electric Power Co., continues to feed coolant into the leaky structures.

Ultimately, the high-level radioactive substances in the water will have to be safely stored, processed and solidified, a job that experts say will almost certainly have to be handled on a specially designed industrial complex. The process of cleaning up the water could take many years, even decades, to complete. The cost could run into the tens of billions of dollars.

Victor Gilinsky, a former member of the Nuclear Regulatory Commission and longtime advisor on nuclear waste, said the problems facing Japan are greater than even the most highly contaminated nuclear weapons site in the U.S., the Hanford Nuclear Reservation in Washington state.

The Department of Energy is decommissioning eight reactors at Hanford and plans to process about 58 million gallons of radioactive sludge now in leaky underground tanks, all at an estimated cost of $100 billion to $130 billion, according to outside estimates. But unlike Fukushima Daiichi, none of the Hanford reactors melted down and virtually all of the site is accessible to workers without risking exposure to dangerous levels of radioactivity.

“It will be a big job, bigger than Hanford,” Gilinsky said, though he cautioned that U.S. costs are unnecessarily high and that the Japanese may be able to do the work more economically.

The immediate problem facing the Japanese is how to store all that water until the reactors and the spent fuel pools are brought under control. The plant’s main storage tanks are nearly full. To make room, Tokyo Electric Power, known as Tepco, released a couple of million gallons of the least contaminated water into the ocean this week, with the expectation that its radioactive elements would be diluted in the ocean’s mass.

But international law forbids Japan from dumping contaminated water into the ocean if there are viable technical solutions available down the road.

So Tepco is considering bringing in barges and tanks, including a “megafloat” that can hold about 2.5 million gallons. Japan has also reportedly asked Russia to send a floating radiation treatment plant called the Suzuran that was used to decommission Russian nuclear submarines in the Pacific port of Vladivostok. The Suzuran was built in Japan a decade ago.

Yet even using barges and tanks to temporarily handle the water creates a future problem of how to dispose of the contaminated vessels.

U.S. and Japanese experts say the key to solving the disposal problem involves reducing the volume of water by concentrating the radioactive elements so they can be solidified into a safer, dry form. But waste experts disagree on exactly how to do that.

The difficulty of concentrating and then solidifying the contaminants depends on how much radioactivity is in the water, the type of isotopes and whether the work can be done on the Fukushima site.

Youichi Enokida, a specialist in nuclear chemical engineering at Nagoya University in Japan, agrees that the material should be put into some type of storage that would concentrate it through evaporation, though Japanese experts generally talk about the need for a sealed pool.

“We must concentrate the liquid,” he said.