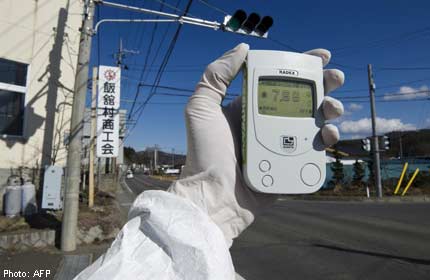 Nuclear fallout may hit Taiwan on Wednesday evening at the earliest, after a small amount of radioactive iodine-131 was detected in the skies over Taiwan last week, said the country’s nuclear energy authorities yesterday. The fallout will come straight from Japan’s Fukushima, where a stricken nuclear power plant is steadily leaking radioactivity, but the impact on Taiwan will be “minimal,” said the Executive Yuan’s Atomic Energy Council (AEC) in a forecast.

Radioactivity at 0.0638 sieverts per hour, much lower than the 0.2-sievert alarm level, is expected, the agency said, adding it will step up monitoring of airborne fallout and warn people not to go out if radioactivity reaches alarming levels.

The estimate, based on an AEC simulation model, is six times the radioactivity detected in a previous observation and equal to the background value.

Breathing in the particles for a whole year is equivalent to one 300th of an X-ray examination, said Lee Jo-chan, director of AEC’s Department of Radiation Protection.

If the leaks continued unabated at the stricken plant as late as 2 p.m. April 3, the nuclear fallout will drift to Taiwan after a change in wind directions, said a weather forecaster with the Central Weather Bureau (CWB).

Westerly winds had been predominant over Japan, which kept sending nuclear fallout eastward across the Pacific until yesterday, when the general direction of wind changed to northeast, according to the bureau.

Boosted by the southward movement of cold air from the Chinese mainland, these northeast winds will push a cloud of strontium and radioactive iodine particles toward Taiwan from a distance of about 2,500 km, and then the weakening high pressure over Taiwan will draw in the fallout, which will engulf the whole island for at least two days from April 6 on.

According to AEC, the radioactivity level around the Dai-ichi nuclear power plant had been found to be “significantly lower,” and the fallout from it will be “diluted” when it reaches Taiwan. “We are ready for it,” AEC’s Lee stressed.

On the other hand, agricultural officials, in response to the approaching menace, are readying preventive measures, while medical professionals offer suggestions on how to stay out of harm’s way.

From this week on, an ongoing checking program will expand to include more vegetables and fruits grown in open-air gardens and orchards in sample checking, and if the situation goes from bad to worse, even fodder grass will be included, said an official with the Executive Yuan’s Council of Agriculture.

Sample checking of dairy products had already begun on April 2.

People should stay home while the nuclear fallout is here in order to avoid prolonged exposure, a specialist with the Veterans General Hospital said, adding those who must go out should immediately take off their clothes and cleanse nuclear contaminants from their bodies as soon as they are back home.

People should wear long-sleeved clothing and masks when they go out on a sunny day and carry an umbrella if it rains, said AEC’s Lee Jo-chan, who also recommended cleansing showers, but not iodine tablets and table salt.

Iodine tablets are intended for people anticipating an exposure to 100-sievert or higher radioactivity, Lee noted, saying indiscriminate use could cause heart palpitation and an abnormal heartbeat in an otherwise normal person.

Taiwan is one of the last places in the northern hemisphere to be affected by the nuclear fallout after a first wave of radioactive particles propelled by western winds hit Canada, Iceland, the United States, Finland, Russia, South Korea, Hong Kong, Vietnam, the Philippines and Tibet.

5 thoughts on “Radioactive Fallout To Engulf Taiwan, People Should Stay Home, Those Who Must Go Out Should Immediately Take Off Their Clothes And Cleanse Nuclear Contaminants From Their Bodies As Soon As They Are Back Home”