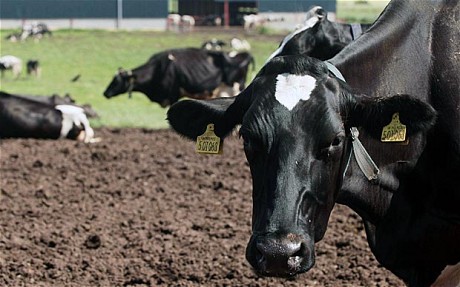 The scientists have successfully introduced human genes into 300 dairy cows to produce milk with the same properties as human breast milk.

Human milk contains high quantities of key nutrients that can help to boost the immune system of babies and reduce the risk of infections.

The scientists behind the research believe milk from herds of genetically modified cows could provide an alternative to human breast milk and formula milk for babies, which is often criticised as being an inferior substitute.

They hope genetically modified dairy products from herds of similar cows could be sold in supermarkets. The research has the backing of a major biotechnology company.

The work is likely to inflame opposition to GM foods. Critics of the technology and animal welfare groups reacted angrily to the research, questioning the safety of milk from genetically modified animals and its effect on the cattle’s health.

But Professor Ning Li, the scientist who led the research and director of the State Key Laboratories for AgroBiotechnology at the China Agricultural University insisted that the GM milk would be as safe to drink as milk from ordinary dairy cows.

He said: “The milk tastes stronger than normal milk.

“We aim to commercialize some research in this area in coming three years. For the “human-like milk”, 10 years or maybe more time will be required to finally pour this enhanced milk into the consumer’s cup.”

China is now leading the way in research on genetically modified food and the rules on the technology are more relaxed than those in place in Europe.

Writing in the scientific peer-reviewed journal Public Library of Science One, the researchers said they were able to create cows that produced milk containing a human protein called lysozyme,

Lysozyme is an antimicrobial protein naturally found in large quantities in human breast milk. It helps to protect infants from bacterial infections during their early days of life.

They created cows that produce another protein from human milk called lactoferrin, which helps to boost the numbers of immune cells in babies. A third human milk protein called alpha-lactalbumin was also produced by the cows.

The scientists also revealed at an exhibition at the China Agricultural University that they have boosted milk fat content by around 20 per cent and have also changed the levels of milk solids, making it closer to the composition of human milk as well as having the same immune-boosting properties.

Professor Li and his colleagues, who have been working with the Beijing GenProtein Biotechnology Company, said their work has shown it was possible to “humanise” cows milk.

In all, the scientists said they have produced a herd of around 300 cows that are able to produce human-like milk.

The transgenic animals are physically identical to ordinary cows.

“The modified bovine milk is a possible substitute for human milk. It fulfilled the conception of humanising the bovine milk.”

Speaking to The Sunday Telegraph, he added the “human-like milk” would provide “much higher nutritional content”. He said they had managed to produce three generations of GM cows but for commercial production there would need to be large numbers of cows produced.

He said: “Human milk contains the ‘just right’ proportions of protein, carbohydrates, fats, minerals, and vitamins for an infant’s optimal growth and development.

“As our daily food, the cow’s milk provided us the basic source of nutrition. But the digestion and absorption problems made it not the perfect food for human being.”

The researchers also insist having antimicrobial proteins in the cows milk can also be good for the animals by helping to reduce infections of their udders.

Genetically modified food has become a highly controversial subject and currently they can only be sold in the UK and Europe if they have passed extensive safety testing.

The consumer response to GM food has also been highly negative, resulting in many supermarkets seeking to source products that are GM free.

Campaigners claim GM technology poses a threat to the environment as genes from modified plants can get into wild plant populations and weeds, while they also believe there are doubts about the safety of such foods.

However, during two experiments by the Chinese researchers, which resulted in 42 transgenic calves being born, just 26 of the animals survived after ten died shortly after birth, most with gastrointestinal disease, and a further six died within six months of birth.

Researchers accept that the cloning technology used in genetic modification can affect the development and survival of cloned animals, although the reason why is not well understood.

A spokesman for the Royal Society for the Protection of Animals said the organisation was “extremely concerned” about how the GM cows had been produced.

She said: “Offspring of cloned animals often suffer health and welfare problems, so this would be a grave concern.

“Why do we need this milk – what is it giving us that we haven’t already got.”

“There are major welfare issues with genetically modified animals as you get high numbers of still births.

“There is a question about whether milk from these cows is going to be safe from humans and it is really hard to tell that unless you do large clinical trials like you would a drug, so there will be uncertainty about whether it could be harmful to some people.

“Ethically there are issues about mass producing animals in this way.”

Professor Keith Campbell, a biologist at the University of Nottingham works with transgenic animals, said: “Genetically modified animals and plants are not going to be harmful unless you deliberately put in a gene that is going to be poisonous. Why would anyone do that in a food?