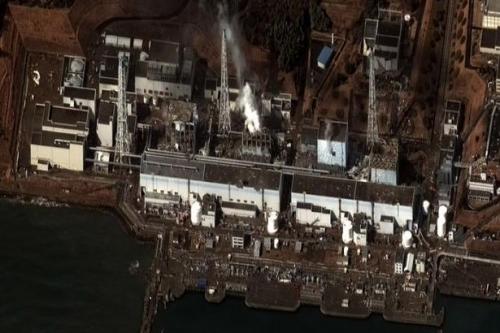 “Physicians for Global Survival  is deeply concerned about the long term health of populations exposed due to accidental or planned releases of radioactivity from Fukushima and from domestic power plants.”

How the US monitors radiation

“The US uses a system of RadNet monitors,” the release said, adding that:

Radiation monitors are “point source” monitors, meaning that the radioactive element or ray must actually strike the monitor to be measured.  They are unlikely to detect radiation as close as twenty five feet above or beside them.  Apparently there are only about 125 of these monitors for the entire continental United States, Hawaii and Alaska.

“They both give off gamma rays (like x-rays for which technicians wear little badges) when they decay.  Iodine releases gamma rays directly and cesium, indirectly when its short-lived decay product, barium-137m, undergoes further decay.”

Alpha and beta radioactivity are more difficult to measure.  RadNet measures them by  “vacuuming” the air and passing it through a filter.  The amount on the filter is then measured.  Sources are contradictory about amount of time between detection, measurement and speed at which the public can be informed.

Because of their poor external penetrance – alpha particles can’t penetrate skin and beta particles don’t go much further than a few millimeters – their danger has been discounted.  As internal emitters, however, their damage can be extensive.  Absorbed in a human body through eating or breathing, they can change enzymes, dislodge ions, and upset strands of DNA.

Radioactive iodine-131 causes cancer by this type of mechanism.  The human body absorbs iodine from food for the production of a thyroid hormone that is important for normal growth, intellectual ability and daily energy – ask anyone who has had a “low” thyroid.  While in the thyroid, radioactive iodine emits beta particles.  Cells have genes which determine their rate of growth and life spans.  Beta particles alter these genes and, eventually, in those who develop cancer, turn off the “growth control” gene so that cells grow wildly out of control producing cancer.

Fortunately the danger from radioactive iodine is relatively short-lived.  With a half-life of  eight days, one tonne becomes a mere 62.5 kilograms in a month.  The danger can be decreased but not eliminated by taking potassium iodide tablets immediately before exposure.

Iodine-131, however, is not the only radioactive element released from Fukushima – or from any nuclear power plant, the group said in the news release.