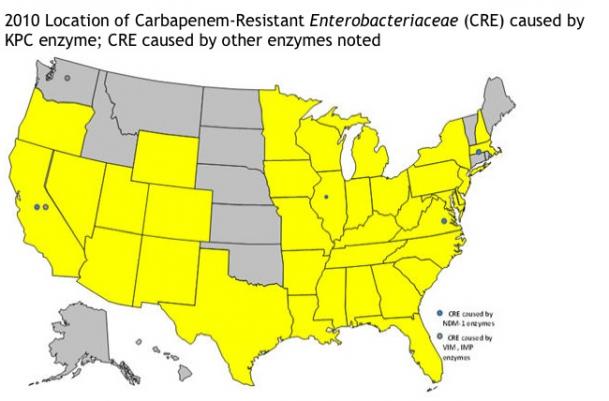 Map from the CDC of states where it has been reported.

The joke that’s going around is that the Mayans got it wrong: The world is ending this year, not 2012.

A superbug is spreading around America, and has hit Southern California.

A dangerous drug-resistant bacterium has spread to patients in Southern California, according to a study by Los Angeles County public health officials.

More than 350 cases of the Carbapenem-Resistant Klebsiella pneumoniae, or CRKP, have been reported at healthcare facilities in Los Angeles County, mostly among elderly patients at skilled-nursing and long-term care facilities, according to a study by Dr. Dawn Terashita, an epidemiologist with the Los Angeles County Department of Public Health.

It was not clear from the study how many of the infections proved fatal, but other studies in the U.S. and Israel have shown that about 40% of patients with the infection die. Tereshita was not available for comment Thursday morning but was scheduled to speak about the study in the afternoon.