They increased the radiation limits for food when Chernobyl happened, but … 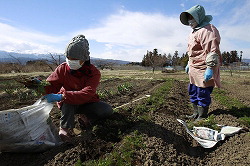 Farmer Sumiko Matsuno, left, and her freind, bag carrots on her farm to eat as she fears no one will buy them with the current radiation fallout, Thursday, March 24, 2011 in Fukushima, Fukushima prefecture, (AP Photo/Wally Santana)

An international advisory body has recommended the Japanese government temporarily raise the annual limit of radiation exposure for the general public in light of the ongoing crisis at the quake- and tsunami-crippled nuclear power plant in Fukushima Prefecture.

The government stipulates that regular citizens in Japan should be exposed to no more than 1 millisievert of radiation per year, but the International Commission on Radiological Protection (ICRP) on March 21 recommended the limit be tentatively raised to 20 to 100 millisieverts per year, with the nuclear crisis showing no signs of abating.

The institution pointed out that even if the power plant comes safely out of the critical situation, areas affected by the accident will remain radioactive for many years to come. Therefore, it suggested, even after the power plant crisis is resolved, the government should keep the upper limit at 1 to 20 millisieverts per year before it gradually brings it back to its original 1, in order to prevent residents of Fukushima Prefecture from abandoning their hometowns.

Both targets proposed by the advisory body greatly exceed the current limit set by the Japanese government, but the ICRP — which normally recommends the annual limit of radiation exposure for nuclear facility workers be set at 50 millisieverts and that for the general public at 1 millisievert — says the proposal is to protect the future of areas facing radioactive contamination.

It is said that radiation exposure in excess of 100 millisieverts per year may slightly increase the risk of cancer.