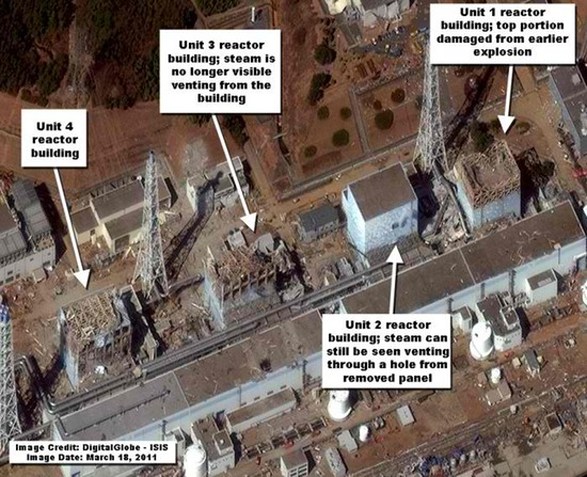 (NaturalNews) The Fukushima situation took a turn for the worse today as two nuclear repair workers stepped into some water at Reactor No. 3 and suffered severe radiation burns requiring immediate hospitalization. The water, it turns out, measures 10,000 times normal radiation levels, and it appears to be leaking from the core of Reactor No. 3.

If confirmed, this can only mean one thing: A containment breach that now risks the spewing of enormous quantities of radiation into the environment, easily dwarfing the releases from Chernobyl in 1986.

Japan’s Prime Minister Naoto Kan had some somber words for the world press, saying “The situation today at the Fukushima Dai-ichi power plant is still very grave and serious. We must remain vigilant. We are not in a position where we can be optimistic. We must treat every development with the utmost care.” (http://apnews.myway.com/article/201…)

“Even if there has been encouraging news such as getting some power back to the site, the installation remains in an extremely precarious and very serious situation that has not yet been stabilized” said Thomas Houdre from France’s nuclear safety agency (http://www.bloomberg.com/news/print…).

Reactor No. 3, of course, is the reactor with the extremely dangerous MOX fuel that’s two million times more deadly than regular enriched uranium (http://www.naturalnews.com/031736_p…). This reactor is so dangerous all by itself that it hardly matters whether Reactors 1, 2, 4, 5 and 6 are brought under control if Reactor No. 3 isn’t. By itself, this facility could dwarf the radioactive fallout levels caused by the Chernobyl disaster, and now it appears a containment leak is very likely to have occurred.

Radiation from the Fukushima catastrophe has already been detected on vegetables 135 miles South of Fukushima, and the Tokyo water supply has been declared unsafe to consume due to high levels of radiation. Low levels of radioactive fallout has been detected across the United States and Canada, but those levels could rise dramatically if Reactor No. 3 has a sustained containment leak and begins releasing more radiation directly into the environment.

As Prime Minister Kan already stated, “We are not in a position where we can be optimistic.” That is a sobering statement from a government that has done its best to downplay the severity of the situation.

What will they do now? If a containment breach has occurred, how will workers be able to even access the nuclear facility to continue making repairs and try to get the cooling pumps online?

Even CNN called this “a potentially ominous development in the race to prevent a large-scale release of radiation.” (http://www.cnn.com/2011/WORLD/asiap…)

A breach in the containment vessel is a game-changer. If this leak actually exists, it would make it extremely difficult to bring the situation back under control.