Update: Believe it or not, there are already a whole host of sanctions against strikers in the current Food Stamp program — the section quoted is actually part of a 1981 Reagan era law. Rep. Joe Baca (D-CA) has introduced a bill to do away with these restrictions. A 1988 Supreme Court case reversed lower court decisions that ruled these sanctions unconstitutional.

All around the country, right-wing legislators are asking middle class Americans to pay for budget deficits caused mainly by a recession caused by Wall Street; they are attacking workers’ collective bargaining rights, which has provoked a huge Main Street Movement to fight back.

Much of the bill is based upon verifying that those who receive food stamps benefits are meeting the federal requirements for doing so. However, one section buried deep within the bill adds a startling new requirement. The bill, if passed, would actually cut off all food stamp benefits to any family where one adult member is engaging in a strike against an employer: 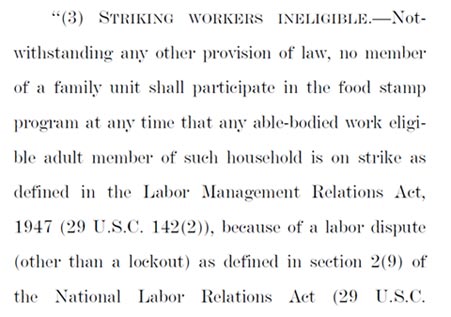 The bill also includes a provision that would exempt households from losing eligibility, “if the household was eligible immediately prior to such strike, however, such family unit shall not receive an increased allotment as the result of a decrease in the income of the striking member or members of the household.”

Yet removing entire families from eligibility while a single adult family member is striking would have a chilling effect on workers who are considering going on strike for better wages, benefits, or working conditions — something that is especially alarming in light of the fact that unions are one of the fundamental building blocks of the middle class that allow people to earn wages that keep them off food stamps.

With a record 42 million Americans on food stamps during these poor economic times, it appears that the right is simply looking for more ways to hurt working class Americans.